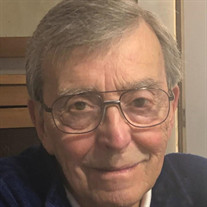 Andrew “John” Anderson, Jr., 83, of Lafayette passed away Friday, July 31, 2020 at Franciscan Alliance East. He was born December 21, 1936 in LaPorte, IN, to the late Andrew J. “Andy” Anderson, Sr. and Marietta (Jacoby) Anderson. He married Deborah A. (Hedrick) Van Horn on January 5, 2002, and she survives. John was a 1954 graduate of West Lafayette Senior High School, and attended Beloit College where he was a member of Pi Kappa Alpha fraternity. He served in the US Army from 1957-1959 and was stationed in Verdun, France. John ran finance companies in both Chicago and Lafayette. He was a gifted woodworker and the owner and operator of the Backdoor Woodshop in Lafayette from 1985-2007. He was co-owner of Victorian House Scones from 2003 until his death. John was a member of the Fraternal Order of Eagles, and a big fan of NASCAR. He was a voracious reader, enjoyed discovering new adventures, watching his grandchildren grow up, and loved ballroom dancing with his wife. Along with his wife, Deborah, he is survived by his son Geoffrey P. Anderson, step son Kyle W. Van Horn, step daughter Erin J. Van Horn, sisters Barbara Wilson and Kathleen Wegg, and brother Arthur Anderson. He is also survived by four grandchildren and two great-grandchildren. No services are scheduled at this time. Memorial contributions may be directed to Almost Home Humane Society – 1705 S 2nd St, Lafayette, IN, 47905 www.almosthomehumane.org. Share memories and condolences online at www.hippensteelfuneralservice.com

The family of Andrew "John" Anderson Jr. created this Life Tributes page to make it easy to share your memories.