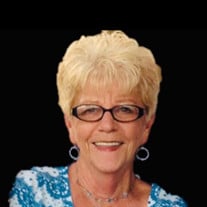 Anna P. Armes, 75, of West Lafayette, passed away Monday, March 30, 2020, at her residence. She was the daughter of the late Truman Irwin and Evelyn (Howard) Irwin. She was born June 25, 1944, in Lafayette. On August 14, 1965, she married Marion Edward Armes. He preceded her in death on February 15, 2018. Along with her husband Marion, she is preceded in death by her parents, three brothers and one sister. Anna worked at the Klondike School cafeteria for many years where she enjoyed seeing all of the smiling faces each day. She then retired from MCL cafeteria years later. Anna loved spending time with family and friends and cherished her grandchildren. She enjoyed watching college basketball, House Hunters, and Family Feud. She was the life of every party, and anyone that knew her well called her Mamaw. She leaves behind two sons, Rodney Edward (wife: Jennifer) Armes and Richard Marion (wife: Lisa) Armes both of Elizabethtown, KY; one daughter, Cindy Ann Morris (Herb Hubner) of West Lafayette, IN; one special nephew, Jay (wife: Kristen) Williams of Lafayette, IN. She is also survived by 15 grandchildren: Mackenzie, Mariah, Emily, Brock, Nicholas, Jake, Brooklin, Rachel, Grace, Caleb, Tanner, Tucker, Taylor, Jalen, and Halie. Due to COVID-19, a celebration of life service will be held at a later date. Memorial contributions may be directed to Community Cancer Network. Share memories and condolences online at www.hippensteelfuneralservice.com

The family of Anna P. Armes created this Life Tributes page to make it easy to share your memories.