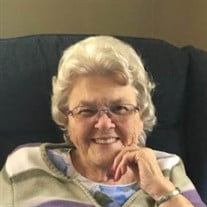 Anna Corrine Blackburn, 85, of Lafayette passed away Wednesday, September 8, 2021 at St. Mary’s Healthcare. She was born February 2, 1936 in Medaryville, IN, to the late James Otis Wayne and Mary (Smith) Duncan. She was a Cook and House mom at Purdue University. After 18 years together, she married Robert “Bob” Cain. Anna was a member of Evergreen Wesleyan Church and a past president of the Eagles Women’s Auxiliary. She enjoyed bowling, playing Bingo and square dancing. Most of all, she loved spending Christmas eve with her grandchildren. Surviving are her children: Rick (Stacey) Wayne, Stoney Thompson, Randy (Jackie) Thompson all of Lafayette, Rocky Thompson of Delphi, Ronnie (Sherrie) Thompson of Stockwell, Steve (Carla) Thompson of Lafayette, Sandy (Tom) Wolfe of Rock Hill, SC, Peggy (David) Fortner of Lafayette and Christie (David) Jacoba of Battle Ground; two sisters Rosie (Mac) McKinney of Romney and Gloria Tudder of Lafayette. She is also survived by several grandchildren and great-grandchildren. Along with her husband, Bob, she is preceded in death by her parents, one sister and one brother. Visitation will be held from 5pm – 8pm Monday, September 13, 2021 at Hippensteel Funeral Home. Funeral service will be 10am Tuesday, September 14, 2021 at the funeral home with Pastor Joe Park officiating. Interment to follow at Bedford Cemetery in Monon, IN. Memorial contributions may be directed to the Evergreen Wesleyan Church. Share memories and condolences online at www.hippensteelfuneralservice.com http://videos.lifetributes.com/1161042

Anna Corrine Blackburn, 85, of Lafayette passed away Wednesday, September 8, 2021 at St. Mary&#8217;s Healthcare. She was born February 2, 1936 in Medaryville, IN, to the late James Otis Wayne and Mary (Smith) Duncan. She was a Cook and House... View Obituary & Service Information

The family of Anna Corrine Blackburn created this Life Tributes page to make it easy to share your memories.