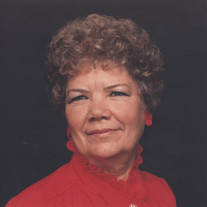 Bessie “Marie” Arndt Gurnick, 97, of Lafayette passed away Tuesday, October 13, 2020 at IU Health Arnett Hospital. Marie was born in 1923 in Somerset, Kentucky to the late Homer and Bertha (Pratt) Brown. She had worked as a PBX operator at Sears for 27 years. Marie was married to Edd Owen Arndt on December 20, 1939. Edd preceded Marie in passing on August 5, 1996. On October 5, 2009, Marie married Michael William Gurnick, and he preceded her in passing on March 3, 2014. Marie kept herself occupied with several hobbies, which included sewing, gardening, fishing, cooking, playing cards with family and friends and reading. She also attended church at First Assembly and Connection Point. More than anything, Marie enjoyed visiting and spending time with her family and friends. In her younger years, Marie loved to travel on the back of a motorcycle, seeing the countryside. She looked forward to Friday night cards with her daughters. These games lasted late, late into the evening. When her grandchildren and great children came to visit her, her face lit up and she made each one feel as though they were the most important person in the world. Her kitchen table was her court, it was there that she and her visitors could sit for hours, a cup of coffee at the ready. The world’s problems would slip away as the stories filled the air. She worked hard. Every day had tasks and things to accomplish. Just a few weeks ago she was asked about her life. She said everything she had and everything she appreciated was based on working hard and that hard work, though it taxes the body, created a sense of peace for her. She was the heart and soul of our family and will be missed more than words can express. Marie is survived by her daughters, Brenda J. (Larry) Ostermeyer of West Lafayette, and Sharon K. Cadwallader of West Lafayette; grandchildren, Daniel Gillis III, Jacqueline (Chuck) Gillis Leake, Richard Ostermeyer, Jerri (Patrick) Brown, and James (Brandy Moore) Cadwallader IV; and great grandchildren, Eddie Payne, Joshua Cooper, Shannon Gillis, Matthew Gillis, Michael Ostermeyer, Allix Ostermeyer, Caleb Brown, Anna Brown and Body Cadwallader; and great-great grandchildren, Aiden Eavey, Quinn Parmley, Sawyer Parmley, Stiles Cooper. In addition to her parents and husbands, Marie was preceded in passing by her daughter, Joyce Gillis; grandchildren, Nicole Parmley, Edward and Stan Ostermeyer; siblings, Susan Jones, Ray Brown, Thelma Sharp, Anna Clarene Thompson, Gene Brown, Edna Herbert, and Robert Brown; and granddaughter-in-law Donna Gillis. Visitation will be held from 1 – 2 p.m. on Thursday, October 22, 2020 at Hippensteel Funeral Home. Funeral service will begin at 2pm with Reverend Adam Light officiating. Interment will follow at Tippecanoe Memory Gardens. In lieu of usual remembrances, contributions may be directed to Arc of Tippecanoe County. Current Covid-19 precautions will be observed along with social distancing. Masks are required. Share memories and condolences online at www.hippensteelfuneralservice.com http://videos.lifetributes.com/1096825

Bessie &#8220;Marie&#8221; Arndt Gurnick, 97, of Lafayette passed away Tuesday, October 13, 2020 at IU Health Arnett Hospital. Marie was born in 1923 in Somerset, Kentucky to the late Homer and Bertha (Pratt) Brown. She had worked as a PBX operator... View Obituary & Service Information

The family of B. Marie Arndt Gurnick created this Life Tributes page to make it easy to share your memories.