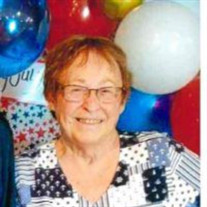 Barb Julian (Lafayette) passed away peacefully at her home November 16, 2021. Barb was born on September 11, 1941, the daughter of the late Glen and Mary Kelly. Barb grew up in the 40s-50s as a “farm girl” in rural Clinton County in a house without electricity yet where some days work was her only friend. Thankfully Barb had 2 older sisters Carolyn Mikesell and Shirley Freestone by her side to get the daily chores done. Both older sisters have passed in recent years so the original 3 “Kelly” girls have been reunited. Barb is survived by her much younger siblings Debbie Lineback (Rossville, IN) and Jeff Kelly (Nashville, TN) that she will be waiting for but hopes they are in no rush. One of Barb’s early passions that carried throughout her life was her love of animals. Her 1st horse named Pal was the start of it all and she would tell stories of riding Pal like the wind with a smile from ear to ear. Barb had several other horses over the years, but after moving off the farm her affection was directed to dogs that she spoiled like they were her babies. Barb graduated from Rossville High School in 1959 and soon after met and married the love of her life Max Julian on June 11th, 1960. Barb and Max started their life together with not much more than the clothes on their backs and a strong work ethic. They worked hard and built their home in the Buck Creek area that has been their home for over 50 years. In this home, Barb and Max raised 3 unruly boys, Steve Julian, Troy Julian, and Rod Julian. For enduring the challenges of raising these boisterous boys, Barb and Max were blessed 6 grandchildren and 3 great grandchildren. Barb was so proud of each and all in her crew! Barbs oldest son Steve (girlfriend Lisa), is the father of grandson Zach Julian (Lafayette) and granddaughter Taylor Julian (West Lafayette). Zach is the father of great granddaughter Chyler and Taylor is the mother of great grandsons Grayson and Finn. Barbs middle son Troy (wife Laura) is the father of granddaughter Kendra Linn (Camden, IN-husband Ryan) and grandson Vance Julian (West Point, IN- wife Lauren). Vance is the father of the newest Julian addition, great grandson “little” Vance. Barbs youngest son Rod (wife Christy) is the father of grandsons Bryce Julian (Lafayette) and Shayne Julian (Lafayette). Barb worked as an inspector at a since closed local company called CTS for around 30 years. She made some of her best friends while working at CTS and kept in touch with several of them after retiring to spend more time with her grand kids. Barb lived a full life with many interests but was always happiest in her home with family around her. She enjoyed reading, playing games online, crocheting, watching horse races, construction projects, talking with her next-door neighbors of over 40 years Pat and Gary, and was always up for a good debate. Barb was lucky in life and even more lucky gambling. She was on the Hoosier Millionaire show when the lotto first came to Indiana and never saw a slot machine, she couldn’t make sing. Barb and Max enjoyed going to Las Vegas and made the trip around 40 times. Thankfully Barb would win a little faster than Max would lose it, so they made a great team! A celebration of life, laid back visitation, will be held from 5pm – 8pm Monday, November 22, 2021 at Hippensteel Funeral Home on 9th and Salem in Lafayette, IN. You can share memories and condolences online at www.hippensteelfuneralsevices.com http://videos.lifetributes.com/1176580

The family of Barbara Jean Julian created this Life Tributes page to make it easy to share your memories.

Barb Julian (Lafayette) passed away peacefully at her home November...