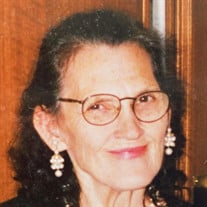 Betty Lucille Butler Wininger, 97, departed this world on October 10, 2020 in the house that her husband built for her at the corner of 24th and Underwood Street seven decades ago—a house which she made a home for their ten children. Betty Lou, as she was often known, was born just before sunrise on the morning of Thursday November16, 1922 in French Lick, Indiana to Wilmer Aldo Butler and Laura Etta Bledsoe Butler. She was a 12-pound baby that was delivered by Doctor Joseph Rudolphus Dillinger. During the Great Depression, Betty and one of her brothers were sent to live with their grandparents, John Wilder Butler and Elizabeth Glenora Moore Butler, who lived on North 16th Street in Lafayette at the site of the present-day Franciscan Health Physical & Occupational Therapy Building. Betty attended Linwood School during the few years she lived with her grandparents in Lafayette. She eventually returned to her parent’s home in southern Indiana where she graduated from West Baden Springs High School in 1940. After high school, Betty moved back to her grandparent’s house in Lafayette where she studied at Indiana Business College for one term. Due to these Lafayette connections, she met Rollie “Pete” Wininger, the son of one of her grandmother’s friends. Prior to the Depression, members of both the Wininger and Butler families had left their farms in southern Indiana to relocate in Lafayette where jobs with the Monon Railroad were plentiful. Betty and Pete eloped on August 8, 1940 when they were married by Reverend Glenn S. Appleman in the parsonage of the First Wesleyan Methodist Church at 1918 North 16th Street. For many years, while health allowed, Betty and Pete continued to attend the First Wesleyan Methodist (later known as Schuyler Avenue Wesleyan Church and currently known as Branch Wesleyan Church). As a teenager she had a job picking strawberries. She said she did not last long at that job because she ate more strawberries than she put in her basket. Besides that, her lifelong job was that of a wife, a mother, and a grandmother. Betty never learned to drive, but she did learn to stoke her coal furnace to keep the house toasty nine months out of the year—something most of us do not know how to do. She was a fan of her hometown hero, Larry Bird, and his Boston Celtics. She also enjoyed rooting for Indiana University basketball in the era of Bobby Knight. In politics, she was a staunch supporter of the Democratic party beginning with President Roosevelt. Betty liked to sit at the kitchen table and have a cup of coffee and a conversation with her husband, her friends, or her family members. She was warm and loving with her family but had a shyness when it came to newcomers. She would often shield herself by clutching a piece of “towelling paper” to her mouth. Mr. and Mrs. Wininger had ten children: Linda Cedarquist (Toby); the late Ladonna Wininger who passed away in February 2005; Herbert Wininger; Judith Russell (James) of Gold Canyon, AZ; Glenn Wininger (Deborah); George Wininger (Kathleen) of Royal Palm Beach, FL; Ellen King (Stephen); Lois Taylor; Gail McCauley (Jeff); and Janet Morehouse (Eldon). Betty and Pete were married for over 73 years, until Pete’s death in February 2014. Betty suffered a debilitating stroke in July 2007. Her children and her grandson, Brent Cedarquist, had been caring for her in her home for the past several years. The family would also like to thank Jackie Watt for helping care for Betty these past few years. Betty is survived by 9 children; 28 grandchildren; 67 great-grandchildren; 13 great-great-grandchildren; a sister Lois Jeanne Stalcup of Paoli, Indiana; and a sister Ruth Saeger of Greencastle, Indiana. She was preceded in death by her parents, her husband, a daughter, a great-granddaughter, a great-grandson, a sister and 4 brothers. Betty leaves 117 living descendants on this earth and each one was special to her. She loved every single one of them; their spouses and their stepchildren; as well as her siblings; her nieces; and her nephews. She never forgot a birthday, and she kept herself very busy sending out birthday and holiday cards to hundreds of people every year. Visitation will be from 5:00 pm to 7:00 pm on Wednesday, October 14, 2020 at Hippensteel Funeral Home. Funeral services will be held at 10:00 am on Thursday, October 15, 2020 at Hippensteel Funeral Home with visitation one hour prior. Interment to follow at Battle Ground Cemetery. Pastor Todd Ladd of Delphi United Methodist Church officiating. The service will also be webcasted on the Hippensteel website (www.hippensteelfuneralservice.com) where you can also share memories and condolences. Please click on the link below to watch the webcast for Betty Wininger. https://webcasts.lifetributes.com/1095148 http://videos.lifetributes.com/1095148

Betty Lucille Butler Wininger, 97, departed this world on October 10, 2020 in the house that her husband built for her at the corner of 24th and Underwood Street seven decades ago&#8212;a house which she made a home for their ten children. Betty... View Obituary & Service Information

The family of Betty Wininger created this Life Tributes page to make it easy to share your memories.