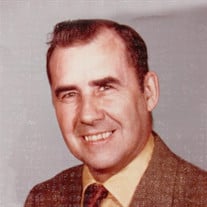 Mr. Charles Thomas Cavanaugh Sr. October 10, 1920 - July 11, 2019 Charles Thomas Cavanaugh Sr., age 98, of Grovetown, Georgia entered into rest on Wednesday, July 11, 2019. He was born at the home of a maternal Aunt in West Lafayette, Indiana, the oldest son of Michael Martin and Anna Helen (Brown) Cavanaugh of Lafayette. He went to St. Ann’s Grade School and then graduated from Jefferson High School in Lafayette. There, he went to work for Haywood Publishing Company in 1939, where he continued to work as a Printing Press Operator for the next 47 years. He volunteered to join the Coast Guard in 1941 and honorably served four years until after the end of WW II. He was stationed in Sewickley, Pennsylvania where he met and married his wife of 69 years, Ruth Mary Donald in 1942. He was a member the St. Lawrence Parish in Lafayette. In his younger years he was an avid sportsman, hunting and fishing with his family, as time allowed. He continued fishing throughout his life and in his later years spent many hours crafting/carving fishing lures that he used and gave to other fishermen. He was a well-known figure in the bowling community in Lafayette, serving as an officer in many leagues over the years and was selected as Mr. Bowler of the Lafayette Bowling Association in 1977. He was a member and officer of the Wabash Valley Gem and Mineral Society where his interests had the family traveling all over the country collecting rocks, minerals and fossils. He was also a member of the Copper Country Rock and Mineral Society of the U.P of Michigan where he and Ruth spent the summer months over 14 years of retirement. He had an interest in the American Indian culture and developed the most amazing skill at knapping arrowheads from the flint and obsidian stones he had collected. After the passing of his wife Ruth in 2012, Mr. Cavanaugh remained in his Lafayette home and was well known to his neighbors as he stopped and talked to everyone as he walked up and down Prairie Lane getting his exercise. He also continued to drive until he was 96 years old. In July 2017, he moved to Grovetown, Georgia where he resided with his youngest son Dennis and Daughter-in-Law Carol, where he remained active and alert until his passing. He is preceded in death by his parents, Michael and Anna (Brown) Cavanaugh, brothers, Michael Francis Cavanaugh (1992), Albert Orville Cavanaugh (1992) and his sister, Bettie Marie Bryan (2017). He also lost his wife, Ruth Mary (Donald) Cavanaugh (2012), his oldest son, Charles Thomas Cavanaugh Jr. (2015), his middle son Donald Lee Cavanaugh (2016) and a daughter-in-law, Linda Kay Heffelfinger Cavanaugh (2017). Charles is survived by his youngest brother, Raymond (Dixie) Cavanaugh of Lafayette, his youngest son Dennis (Carol) of Grovetown GA, Daughters-in-law Shirley (Turner) Cavanaugh of Ft. Lauderdale FL, Sharon (Reed) Cavanaugh of Tecumseh, MO, Lisa (Isbell-Rousch) of Lafayette. Grandchildren: Charles Thomas (Nadine) Cavanaugh III, Kimberly Marie Cavanaugh, Nicholas Robert (Jessica) Cavanaugh – all of Ft. Lauderdale FL. - Donald Lee (Sue) Cavanaugh, William Michael Cavanaugh and Christopher Daniel (Melody) Cavanaugh all of Tecumseh MO. – Erin (Matthew) Gilbert of Lafayette – Dennis Bray of Lafayette - Crystal Marie (Tomas) Hanson of Atlanta, GA, Candance (Steven) Turcotte of Greenwood SC, Sabrina (Chris) Coleman of Evans GA and 22 Great Grandchildren. In lieu of flowers, the family is requesting that you make a donation to either the American Cancer Society or the Humane Society. Visitation will be held from 5pm-8pm on Monday, July 15, 2019 at Hippensteel Funeral Home. Service will take place at 10am on Tuesday, July 16, 2019 at the funeral home with Father Eric Underwood officiating. Interment will follow at Tippecanoe Memorial Gardens. Share memories and condolences online at www.hippensteelfuneralservice.com

The family of Charles Thomas Cavanaugh Sr. created this Life Tributes page to make it easy to share your memories.