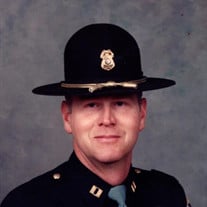 Charles William “Chuck” Molter, 73, of Battle Ground, passed away Thursday, November 11, 2021 at his home. Chuck was born July 28, 1948, in Lafayette, IN, to the late Clifford William and Mary Louise (Sheppard) Molter. He was a graduate of Frontier High School and later Purdue University. He proudly served his country in the United States Army National Guard. On January 26, 1969 he married Clara Page in Brookston, IN and she survives. Chuck worked in Law Enforcement for the West Lafayette Police Department for 22 years earning the rank of Deputy Chief. He also served as the Battle Ground Town Marshal for 33 years. He served with the Tippecanoe Co. Sheriffs office over 16 years. Chuck was recognized for his excellent service being awarded the Outstanding Soldier – Sgt. Major’s Award in 1970. He was the WLPD Officer of the Year in 1976 and earned the Governor’s Award for Excellence in Service 2012. Chuck enjoyed time spent farming with his Dad, going to Lake Shafer and the special times with grandchildren driving tractors around the family farm. He also enjoyed playing in the family bands. Along with his wife, Clara, he is survived by two daughters: Jill (husband, Don) Molter-Baumis of Lafayette, IN and Heather (husband, Matthew) Poore of Anderson, IN; siblings: Joyce (husband, Dan) Culver of Brookston, IN, Sue (husband, Rex) Shipplett of West Lafayette, IN, Don (wife, Myrna) Molter of Lebanon, IN, and Mark (wife, Debbie) Molter of Lafayette, IN. He is also survived by his seven beloved grandchildren: Jason, Jacob, Kinzie, Kali, J.R., Noah and Delaney. He is preceded in death by his parents. Visitation will be held from 5pm – 8pm Tuesday, November 16, 2021 at Hippensteel Funeral Home. Funeral service will begin at 11am Wednesday, November 17, 2021 with Pastor Sherri Rohrer officiating. The family respectfully requests that everyone wear masks. Memorial contributions may be directed to the Battle Ground United Methodist Church – 201 Tipton St, Battle Ground, IN 47920 or the Battle Ground Police Department – 100 College St., Battle Ground, IN 47920. Chuck's Service will be WEBCAST Please share your memories and condolences with us online at www.hippensteelfuneralservice.com Click on the link below to watch the webcast of Charles ''Chuck'' Molter. https://webcasts.lifetributes.com/1175183 http://videos.lifetributes.com/1175183

The family of Charles "Chuck" Molter created this Life Tributes page to make it easy to share your memories.