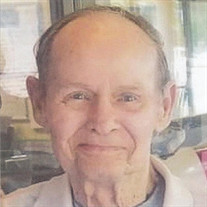 On April 26, 2020 a gaping hole was left in the Gastineau family when Clarence Edwin Gastineau, 89, of Lafayette, left this world. He was a resident at St. Elizabeth Healthcare in Delphi. Clarence was born November 27, 1930 in Pulaski County, KY to the late Roscoe and Vera Leigh Gastineau. He was a 1949 graduate of Francesville High School and proudly served his country in the United States Air Force from 1949-1950. On March 1, 1953 he married the beautiful love of his life Dixie Lee Moncel in Francesville, IN and she was at his side when he passed. Clarence worked as a fork lift driver for Rea Magnet Wire for 27 years before retiring in 1987. He was the first president of East Tipp Summer Recreation in 1966 and later inducted into the ETSR Hall of Fame. He was known as The King of Duct Tape, saying “That’ll hold it!”...even on a broken tomato plant or small tree. He had a quick wit, big heart, twinkling blue eyes, and a mischievous smile. Some of his favorite pastimes were spending time with his family, watching sports, playing Euchre, mowing the lawn, fishing, bonfires, riding the grands around on the lawn mower, and attending all the kids’ sports activities. Content with the small things, he was so very proud of his big Gastineau family and the big unconditional love that holds it together. His forever grateful children are: Allen Gastineau (Gary Palmer) of Fishers, Roger Gastineau (Carol) of West Lafayette, Debra Bradley (Dan Hooper) of Lafayette, Diana Koontz (John) of Lafayette, Jeri Wilson (Brian) of Grain Valley, MO, and Elaine Zink of West Lafayette. His brother Donald Gastineau (Vicky) of Lafayette and the much-loved 15 grandchildren and 19 great-grandchildren also survive. Clarence was preceded in death by his parents, sisters Alma Long and Betty Weaver, and brother Jerrel Gastineau. A private family service will be held at Hippensteel Funeral Home. Private Interment will follow at Tippecanoe Memory Gardens. A Celebration of Life will be held when larger gatherings are permitted. Thank you for understanding in these difficult times. Memorial contributions for Clarence, and in honor of Dixie, may be directed to the Alzheimer’s Association. Share memories and condolences online at www.hippensteelfuneralservice.com. https://webcasts.lifetributes.com/1065570

On April 26, 2020 a gaping hole was left in the Gastineau family when Clarence Edwin Gastineau, 89, of Lafayette, left this world. He was a resident at St. Elizabeth Healthcare in Delphi. Clarence was born November 27, 1930 in Pulaski County,... View Obituary & Service Information

The family of Clarence Edwin Gastineau created this Life Tributes page to make it easy to share your memories.