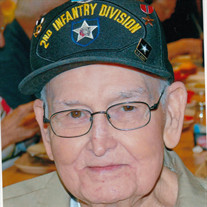 Clarence “Jack” Scott, 89, of Antioch, TN formerly of Lafayette passed away Friday, June 14, 2019. He was born July 6, 1929 in Fithian, IL, to the late Clarence and Hildred (Clingan) Scott. Jack graduated from Oakwood Township High School in Muncie, IL. He was employed with the Indiana State Highway Department as a Relocation Agent for 20 years. On August 2, 1956 he married Mary Elizabeth Sines in Lafayette. She preceded him in death on January 27, 2002. Jack was a member of the United States Army serving during the Korean War. He was a life-long member of the American Legion Post #11, the VFW #1154 and Voiture 40 & 8. He enjoyed gardening and Purdue Athletics. He is survived by his children: Lou Anne Scott of Antioch, TN and son Kenny (Vi) Burke Mishawaka, IN; siblings Wayne Scott of Oakwood, IL, James Scott of Danville, IL; and sister-in-law Jeanne Scott. He is also survived by three grandchildren: Brad Richardson, Jenny Joy, Rachel Campbell, twelve great-grandchildren, seven great-great grandchildren, both his Indiana and Tennessee friends and his buddy Desi. Along with his wife Elizabeth, he is preceded in death by his parents, daughter Nancy Richardson, great grandson Matt Boone, brother Glen Scott and two sisters Thelma and Garnet. Funeral service will be held 11 am Friday, June 21, 2019 at Hippensteel Funeral Home with visitation one hour prior to service. Interment to follow at Tippecanoe Memory Gardens. Military Honors will be conducted by the American Legion Post #11 and the United States Army. In lieu of flowers, contributions may be directed to Natalie’s Second Chance or the Voiture 40 & 8 Nurse’s Scholarship Program. Share memories and condolences online at www.hippensteelfuneralservice.com http://videos.lifetributes.com/1006866

The family of Clarence "Jack" Scott created this Life Tributes page to make it easy to share your memories.