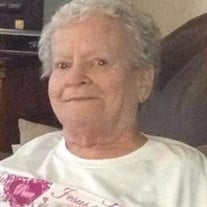 Constance “Connie” Whitlock, 86, of Mulberry passed away Friday, September 6, 2019 at Mulberry Health Care. She was born May 4, 1933 in Battleground to the late Fred Howard and Goldie Pearl (Middleton) Scott. On May 30, 1950 she married Chester E. Whitlock. He preceded her in death in 1987. Connie had been a Nurses Aid at Scotts Nursing Home, Clarks Hill, and the Mulberry Lutheran Home for over 20 years retiring in 1980. She was a Homemaker who was very active in the community. She attended the Community Christian Church, enjoyed doing word search puzzles, shopping and spending time with family and friends. Connie is survived by her son: Harold (Candy) Whitlock of Hancock County, TN and daughter: Sandy (Jim) Douglas of Frankfort. She is also survived by four grandchildren: Shonna (Tim) Sutton, Melinda (Blaine) Butler, Chad Whitlock, Brandon (Corey) Douglas and nine great grandchildren. Along with her husband Chester and her parents she is preceded in death by a son Edwin, five brothers: Milton, Donnie, Vincent, Harold and Clarence, six sisters: Norma, Barb, Lucille, Helen, Betty and Lorene. Visitation will be held from 4 to 8 pm Monday, September 9, 2019 at Hippensteel Funeral Home. Funeral service will be 10 am Tuesday, September 10, 2019 at the funeral home. Interment to follow at Tippecanoe Memory Garden. Pastor Tim Grasham to officiate. In lieu of usual remembrances, contributions may be directed to Cancer.org . Please share memories and condolences online at www.hippensteelfuneralservice.com http://videos.lifetributes.com/1022577

The family of Constance "Connie" Whitlock created this Life Tributes page to make it easy to share your memories.