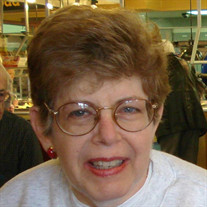 Constance (Connie) Pope Lagally died suddenly, due to complications during surgery, on December 23, 2020, on the 45th anniversary of her marriage to her loving husband, Ralph, who predeceased her in 2011. Connie was born in San Juan, Puerto Rico. October 24, 1950, to Lillian Gorzycki and Robert Pope. Connie received a BS degree in Chemistry from Universidad de Puerto Rico and her MS degree in chemistry from Universidad de Puerto Rico, Recinto de Mayagüez. She began her career at Eli Lilly in San Germán, P.R., where she met her husband, Ralph. According to memoirs of her mother-in-law: “The Lab was not a fancy place and Ralph had a lot of problems to get things started. Luckily he had a very good assistant, Connie Pope., who spoke fluent Spanish and English and who was more or less the boss around there”. That seems entirely plausible; Connie was vivacious and outgoing and loved to talk. She was a gift to Ralph, who blossomed in her love. Connie spent her entire career at Eli Lilly, transferring to Lafayette in the mid-1970s. She rose to high-level positions at Lilly, eventually managing a complete division. In later years, because of her language skills, Lilly asked her to take on marketing and training roles that involved frequent travel to Spain and other Spanish-speaking countries. Despite suffering from multiple sclerosis from a relatively young age, Connie did not limit her activities. She and Ralph loved to travel, to Europe and at time-shares all over the US as well as other countries. She particularly loved cats, having typically a multitude of them in her home and volunteering at the local Humane Society and in animal shelters. She was an avid cross-stitcher, creating gifts for everyone in her circle of family and friends. She loved to garden. Connie is survived by her sister Susie Pope and her nieces Margarita, Tania, and Karla, as well as by brothers in law Hermann (Karen) Lagally and Max (Shelley) Lagally, and nephews Karl, Eric, Douglas, and Karsten Lagally, and niece Kristen Lagally (Amorose). She is also survived by her best friend and helpmate Melissa Cochran, and her three cats Oscar, Ben, and Ricky. Her parents and her husband predeceased her. The family would like to thank the doctors and medical staff who supported Connie throughout the years. Memorial contributions may be made to the Humane Society of the U.S. or to Almost Home Humane Society, Lafayette IN. Hippensteel Funeral Home is handling arrangements. You are invited to share memories and condolences online at www.hippensteelfuneralservice.com.

Constance (Connie) Pope Lagally died suddenly, due to complications during surgery, on December 23, 2020, on the 45th anniversary of her marriage to her loving husband, Ralph, who predeceased her in 2011. Connie was born in San Juan, Puerto... View Obituary & Service Information

The family of Constance Pope Lagally created this Life Tributes page to make it easy to share your memories.