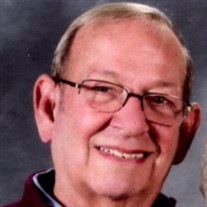 Dennis Clark, 77, of Battle Ground passed away Sunday, May 10, 2020 at his residence. He was born April 7, 1943 in Lafayette to the late Robert and Helen (Brenner) Clark. He was a graduate of Lafayette Jefferson High School. On February 20, 1960 he married Bonnie Braugh at Redeemer Lutheran Church and she survives. He was a member of St. James Lutheran Church. Dennis owned Lafayette Glass Company and Central Indiana Glass Company. He was the Director of the National Glass Dealers Association for many years and was the first president of the Indiana Glass Association. He was honored as the Glass Digest Dealer of the Year in 1986 and was inducted into the Glass and Metal Hall Fame in 2002. Dennis was a car enthusiast with memberships in the Antique Car Club of Lafayette and the National Antique Auto Club. He was a founding member of the Black Widows Car Club in Monticello. He was even featured on American Pickers where he sold them a Broncho. He loved the hunt of auctions and flea markets and couldn’t pass up a deal. His favorite quote was “He who dies with the most toys wins” and he claimed he was ahead. His mottos were “If it is cheap or free, you gotta have it” and “If you really, really, really want something, how can you pay too much?”. Dennis was also a life-time member of the Lions Club and the NRA. His favorite night was Tuesday, guys night out with the Wildcat Creek Hunt Club. He had a great fondness for westerns and was a huge fan of Gene Autry and truly lived by the Cowboy Code. Surviving along with his wife, Bonnie, are his children: Mick Clark (wife, Mary) of Del Ray Beach, FL, Becky Kosten (husband, Eric) of Leonardtown, MD, Chris Clark of Lafayette, and Aimee Clark also of Lafayette; brother Edward Clark (wife, Janis) and brother-in-law Frank Hayden. He is also survived by his grandchildren: Brenton Clark, Kaitlyn Kirby (husband, Chris), Joseph Kosten, Matthew Kosten, Mia Clark, Hannah Clark, Jaeda Clark; and great-grandchild Eliza Kirby. Dennis is preceded in death by his parents, sister Ginny Hayden and daughter-in-law Kelly Clark. His family would like to thank his friends who honored him with a parade of 122 antique cars the week before his death. It was very special and meant a lot to him and his family. Private family service to be held. Hippensteel Funeral Home assisting family with arrangements. Memorial contributions may be directed to St. James Lutheran Church. Please share memories and condolences online at www.hippensteelfuneralservice.com https://webcasts.lifetributes.com/1067079

Dennis Clark, 77, of Battle Ground passed away Sunday, May 10, 2020 at his residence. He was born April 7, 1943 in Lafayette to the late Robert and Helen (Brenner) Clark. He was a graduate of Lafayette Jefferson High School. On February 20,... View Obituary & Service Information

The family of Dennis Clark created this Life Tributes page to make it easy to share your memories.