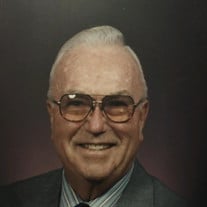 Donall Dean Heman, 97, of Battle Ground, passed away on Wednesday, December 30, 2020 at Westminster Village where he had resided for the past 5 years. He was born on May 2, 1923 in Battle Ground to the late Chester A. and Vearna (Watkins) Heman. He married Marjorie Anne Mitchell on July 9, 1944 and she predeceased him on November 22, 2018. Don was a member of Battle Ground United Methodist Church for 97 years. He used his head, heart, hands, and talents to serve as a Lay Leader, chairman, director, pianist, vocalist, and worker. He will be remembered as a kind, caring and decent man. For the past few months he required assistance with his care, and his many caregivers commented that he remained so very polite and appreciative of their help. He was a proud military veteran of World War II, serving our country in the US Army at the Ardennes and Central Europe in 1944 and 1945, including the Battle of the Bulge. He was privileged to participate in an Honor Flight to Washington DC on September 30, 2014, accompanied by his son Daniel and grandson Jason as guardians. Don owned and operated the Cities Service station in Battle Ground. He also drove a school bus, delivered mail, and was a founding member of the Tippecanoe Township Volunteer Fire Department. At age 37 he pooled his resources in order to purchase farmland and machinery. Don loved to farm and continued that until his retirement in 1989; then for many years well into his 80’s, assisted his neighbors who purchased the land and machinery upon his retirement. Surviving are his son Daniel (Jane) Heman of West Lafayette; daughters, Phyllis Kirby of Battle Ground and Beverly (William) Sobczak of Santa Maria, CA; grandchildren Jennifer Hardesty of Battle Ground, Jason (Brooke) Heman of Watertown, MA, Christy (Dylan) Reynolds of Wabash, Matthew (Lisa) Sobczak and Melissa Sobczak of Santa Maria, CA; great-grandchildren Dylan, Samantha and David; and great-great grandchildren Addison and Jamieson. Also surviving is his sister Dorothy Mennen of Lompoc, CA, sister-in-law Ruth Weekley of Wabash, brother-in-law Phillip (Nancy) Mitchell of Milroy, sister-in-law Oveta Mitchell of Lafayette, and many nieces and nephews. He is preceded in death by his wife, his parents, infant daughter Carolyn Sue, great-granddaughter Cabrielle Ubelhor, and son-in-law Donald L. Kirby. The family wishes to thank the dedicated staff at Westminster Village for the loving care provided to Don during his years as a resident and especially during his final days. Visitation will be held at 10:00am until the time of service at 11:00am on Monday January 4, 2021, at Hippensteel Funeral Home, 822 North 9th Street, Lafayette. Pastor Sheri Rohrer will officiate. Masks and social distancing will be required. Interment will follow at Battle Ground Cemetery with full military honors. Service will be livestreamed and available for viewing on the funeral home website. Memorials to Battle Ground United Methodist Church, PO Box 302, Battle Ground, IN 47920. You may share memories and condolences online at www.hippensteelfuneralservice.com http://videos.lifetributes.com/1111128 https://webcasts.lifetributes.com/1111128

Donall Dean Heman, 97, of Battle Ground, passed away on Wednesday, December 30, 2020 at Westminster Village where he had resided for the past 5 years. He was born on May 2, 1923 in Battle Ground to the late Chester A. and Vearna (Watkins)... View Obituary & Service Information

The family of Donall Dean Heman created this Life Tributes page to make it easy to share your memories.

Donall Dean Heman, 97, of Battle Ground, passed away on Wednesday,...