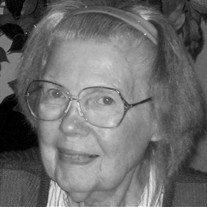 Dorothy Mae Western Andrews, 93, of Zionsville, IN, formally of Lafayette, died November 14, 2019, at Marquette Manor Health Center in Indianapolis. Dorothy was born on February 11, 1926, in Burlington, Iowa, the only child to the late Vernon Boyd Western and Alice (Randolph) Western. After moving to Hoopeston, Illinois, in 1929, Dorothy graduated from John Greer High School, in 1944. She also attended Purdue University. On June 22, 1947, she married her high school sweetheart, Dale W. Andrews, in Hoopeston. After 65 years of marriage, he proceeded her in death on March 10, 2013. After moving to Lafayette, she worked for seven years at the A&P grocery. She enjoyed being a homemaker and volunteering at Murdock Elementary School where she assisted students with strengthening their reading skills. She also volunteered at Trinity United Methodist Church in various ministries. Dorothy is survived by her son David Paul Andrews of Indianapolis, daughter Jill (Phil) Pegram of Carmel, and grandson Alex Pegram. Along with her husband, she is preceded in death by her parents and daughter-in-law Sharon (Stewart) Andrews. Dorothy was a member of Trinity United Methodist Church, The Barbara Standish Chapter of the Daughters of the American Revolution (Hoopeston, IL), and a former member and past president of the Tippecanoe County Extension Homemakers and Lafayette Girls Club. Visitation will be held from 1pm – 2pm Thursday, November 21, 2019 at Hippensteel Funeral Home in Lafayette, Indiana. Funeral service will begin at 2pm with Reverend Tracey Leslie officiating. Final interment to follow at Tippecanoe Memory Gardens Cemetery, West Lafayette, Indiana. Memorial contributions may be made in Dorothy’s name to Trinity United Methodist Church, 509 North Street, Lafayette, IN 47901. Share memories and condolences online at www.hippensteelfunearalservice.com http://videos.lifetributes.com/1036533

Dorothy Mae Western Andrews, 93, of Zionsville, IN, formally of Lafayette, died November 14, 2019, at Marquette Manor Health Center in Indianapolis. Dorothy was born on February 11, 1926, in Burlington, Iowa, the only child to the late Vernon... View Obituary & Service Information

The family of Dorothy M. Andrews created this Life Tributes page to make it easy to share your memories.