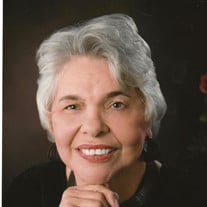 Dorothy Clements Indiano was born on January 26, 1934, in Camden New Jersey, and died on February 5, 2021 with her family close by. She was adopted at an early age by George and Evelyn (Herzstein) McCorkle, who brought her in to a large and close extended family. Although she was an only child, she had many aunts, uncles and cousins who lived on the same block. Her cousins became her sisters and brothers and lifelong friends who delighted her always when they were together. She attended Sacred Heart School in Camden and graduated from Camden Catholic high school. After graduation, she became a Comptometer operator. She began work at RCA where, in an elevator, she met her future husband, Michael Indiano. After marrying Mike, she welcomed five children into this world, Anna (John) Claxton, Vic (Jane), Michael (Cate), Joseph (Jude), and Frank (Laura) Indiano. She and Mike moved to Indiana in 1961, where she elected to become a full-time ringmaster of a domestic circus featuring five kids, their pizza eating friends, a husband and pets who also served as the trapeze artists, tightrope walkers, animal trainers, and clown acts. In her late 30s, she realized that she could not help send five kids to college as a comptometer operator and went back to school at IUPUI, becoming a registered nurse. She specialized in psychiatric nursing, and cared deeply for her patients at Methodist, LaRue Carter, Wishard and Community hospitals. Upon retirement, she realized her dream of traveling internationally, and spending time with her five children, 13 grandchildren, 12 great-grandchildren, and faithful dog Beau. In life, she was famous for her big heart, her ability to make everyone feel welcome, infectious laughter, sense of humor, love of crabs, oysters, and Manhattans, and her incredible tolerance and patience. In keeping with her wishes, we will have a celebration of life party in August 2021, when the fear of Covid decreases sufficiently to allow us to enjoy each other in close proximity as friends and family, and not distanced as agents of infection. In lieu of flowers or a donation to charity, we encourage you to take a loved one out for a meal, a few drinks and some good hugs

Dorothy Clements Indiano was born on January 26, 1934, in Camden New Jersey, and died on February 5, 2021 with her family close by. She was adopted at an early age by George and Evelyn (Herzstein) McCorkle, who brought her in to a large and... View Obituary & Service Information

The family of Dorothy Indiano created this Life Tributes page to make it easy to share your memories.