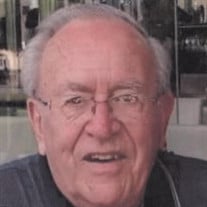 Douglas (Doug) Seymour Gledhill (Cookie) was born on June 17, 1940, in Peterborough, Ontario, Canada. Although Doug remained a Canadian citizen, he did enlist in the Army Reserve and served 6 years. Doug was 81 at the time of his death on November 26, 2021. He was the son of Douglas Haig Gledhill and Alma Helen Seymour Gledhill. Preceding him in death besides his parents was a brother, John Ronald (2017) and a sister, Lynda Dawn (2016). A brother, Robert Byron, lives in Calgary, Alberta, Canada. Also surviving is aunt, Shirley Seymour, and cousins. Doug moved to the USA at the age of 9 when his father was transferred to Danville, IL. He lived and was educated in Illinois and stayed there until 1967 when he moved to Charleston, IL as an Eisner Store Manager. He was subsequently transferred to Lafayette, IN in 1968. He managed two other Eisner stores in his time with Eisner, the store on Northwestern Avenue in West Lafayette, and the one at Market Square in Lafayette. In 1972, he left Eisner and became a route salesman and franchise owner for Archway Cookies. This is when Doug got the nickname “Cookie”. He maintained the cookie route for 13 years. After he left Archway, he became an employee of Gunstra Builders, retiring in 2002. After retirement, Doug operated a business called the Cookie Jar where he did small jobs for older folks who needed someone they could trust in their homes. He would sit with them and have a cup of coffee and a cookie after finishing the job. He married Judith Ellen Erickson on August 11, 1962. His proudest achievements are his two daughters, Janeen Ellen, of Mabank, TX, and Julia Diane, (Lisa Grove), of Lafayette. On most summer nights in the 70s and early 80s, Doug could be found throwing a ball for the girls to learn to throw and catch. Both girls learned their lessons well and played softball all through their growing up years, including at Purdue University. One of the pleasures in his life were the puppies and cat his daughters brought into their parents’ lives. From Tramp, Zach, Kelly, Kelsey, Tessa, Bayley to Maury the cat, Doug enjoyed getting to know and care for all of them. Doug was best known for his ability to tell a really good story or joke, and just being a good buddy to all who knew him. Most mornings for many years, Doug could be found at the Tick Tock or the Downtowner where he had breakfast with his cronies Dick Ketterer, Ron Lyons and Kent Brenner. Doug and Judy do not have a large family, but lifelong friends like Ann and Rick Wells, and Cheri and Rodger Brouwer more than made up for that. Doug’s favorite baseball team, the Chicago Cubs, gifted him with a World Series win in 2016. Doug got to see the Cubs play at Wrigley Field that season in September against the Brewers. The Cubs came through with a walk-off win! His favorite local team, the Lafayette Aviators, provided many a summer night of good baseball watching as well. Doug was able to attend a few Aviators games in 2021, including on his 81st birthday. Of course, on fall afternoons, Purdue football was a priority, followed by Boilermaker basketball. One of Doug’s favorite haunts was the Eagles on South 18th Street in Lafayette, sitting with his old buddies Floyd Snethen and Steve Chadwell. He was a 25-year member of the Eagles. Services will be for the immediate family only with cremation services offered at Hippensteel Funeral Home. A Celebration of Life Gathering will be held at a later date. The family would like to take the opportunity to thank the oncology team at Franciscan Health and the doctors and nurses at Franciscan Hospital for the loving care they provided. Additionally, the family would like to thank Creasy Springs for the care they provided. Donations in Doug’s name may be made to the Almost Home Humane Society at 1705 S 2nd Street, Lafayette, IN 47905.

Douglas (Doug) Seymour Gledhill (Cookie) was born on June 17, 1940, in Peterborough, Ontario, Canada. Although Doug remained a Canadian citizen, he did enlist in the Army Reserve and served 6 years. Doug was 81 at the time of his death on November... View Obituary & Service Information

The family of Douglas Seymour Gledhill created this Life Tributes page to make it easy to share your memories.