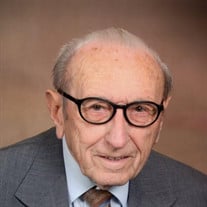 Edward Elliott Kirkpatrick, 97, of West Lafayette, IN passed away Wednesday afternoon, Feb. 27, at University Place, West Lafayette following a short illness. Born Jan. 1, 1922, in Flora, he was the son of James and Leah (Smith) Kirkpatrick. The family moved to Frankfort in 1924, and he graduated from Frankfort High School in 1940. After completing one year at Indiana State University, Terre Haute, he became sports editor of the Frankfort Morning Times. In 1942, he left for service in World War II. He was an administrative specialist in the U.S. Army’s Air Transport Command stationed in Nigeria from 1943 to 1945. His final rank was staff sergeant. When he returned from military service, he attended Indiana University, Bloomington, graduating in 1948 with a bachelor’s degree in journalism/business. While at IU, he was active in the Wesley Foundation where he met his future bride, Margaret (Peggy) Potter of Bloomington. Married on June 13, 1948, they were together until her death on Sept. 12, 2006. During his career, Kirkpatrick served in management and editorial positions on several newspapers including the Knightstown (IN) Banner; the Harrisburg (IL) Daily Register; the Frankfort Morning Times, and the McLeansboro (IL) Times Leader. In 1967, Kirkpatrick became editor/writer for the Agricultural Communication Department (ACD) at Purdue University. He also worked at Purdue athletic and musical events for 30 years both prior to and after his retirement from the ACD in 1986. After his retirement from ACD, he worked for Breaking New Ground Center in Purdue’s Agricultural and Biological Department for over 25 years. He also co-authored two books: “4-H in Indiana” and “History of the Ball Hill Cemetery.” He was a member and officer in several organizations and was a long-time member of St. Andrew United Methodist Church in West Lafayette, the Masonic Lodge, and Commandery of Knights Templar. Kirkpatrick is survived by daughter Constance Lenzer (Ron) of North Canton, OH; sons Michael Kirkpatrick (Jane), West Lafayette, and Jeffrey Kirkpatrick, Indianapolis, a close cousin, Julian Hutchinson of Sparta, WI, grandchildren, Katie Levels (Ryan), North Canton, OH; David Lenzer (Laura), Gilbert, AZ; Daniel Lenzer (Desirae), North Canton, OH; Erin Braun (Joseph), Greencastle, IN; Rachel Kirkpatrick, Bloomington, IN; Christopher Kirkpatrick, Englewood, CO, Kevin Kirkpatrick, and nine great-grandchildren. In addition to his wife and parents, Kirkpatrick was preceded in death by daughters Rebecca Mayne and Lisa Kirkpatrick and siblings, Robert, John and Margaret Kirkpatrick. Visitation will be from 3 to 6 PM Sunday, March 3, at Hippensteel Funeral Home, Lafayette. The funeral will be at 9:30 AM Monday, March 4, St. Andrew United Methodist Church, West Lafayette, IN. Burial will follow at Ball Hill Cemetery, Cutler. Share memories and condolences online at www.hippensteelfuneralservice.com http://videos.lifetributes.com/958959

The family of Edward Elliott Kirkpatrick created this Life Tributes page to make it easy to share your memories.