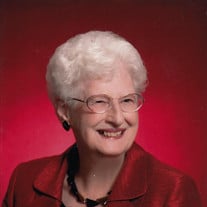 Evelyn (Evie) Gertrude (Gert) Brant-Graf, age 87, of Zionsville, IN passed away Wednesday, May 6, 2020 after her battle with the Covid-19 virus. On December 29, 1932, Evelyn was born at Home Hospital in Lafayette, IN to Margaret A. (Lecklitner) and Charles M. Russell. Evelyn graduated from Crouch Elementary School in 1947 and Jefferson High School in 1951. After high school, she worked at Lafayette Life Insurance Company for six years. In the earlier 1980’s, Evelyn worked at Purdue University in the library. She was a member of Grace United Methodist Church. Evelyn enjoyed playing Euchre with her life-long girlfriends, visiting at the community gazeebo and watching Westerns on TV. In 1954, Evelyn married her high school sweetheart Nicholas (Nick) C. Brant. Nick unexpectedly passed away in 1979 just weeks before their 25th Wedding Anniversary. In 1982, Evelyn married Richard (Dick) D. Graf. She was a loving care-giver for most of her second marriage. Dick passed away after a long illness in 2008. Evelyn is survived by her two children, Pamela Sue Brettnacher (Joseph A.) and Michael David Brant (Joyce). “As children, we were raised with strict rules and lots of love. Mom volunteered at Longlois Elementary School, kept a beautiful home, loved to work in the yard and had lots of laughs with our dad. Our family vacations to Florida will always be remembered.” Pam and Mike blessed Evelyn with 3 grandchildren, Amanda Dorn (Tyler), Zachary Brettnacher (Ally), and Meagan Brant. Later in life, Evelyn’s greatest joy came from her great-grandchildren, Camilla, Kennedy and Parker Dorn and Sydney Brettnacher, who lovingly called her Gigi. Daughter-in-law Joyce and Mike blessed her with an extended family of children, grandchildren and great-grandchildren. Evelyn enjoyed hearing family stories from the Carolina’s and seeing pictures of all the kids! Evelyn’s second marriage extended her family even more with 3 step-daughters, Sandra L. Hageman (Steve), Cynthia A. Thayer and Susan K. Bledsoe (Douglas). Her step-grandchildren and Richard’s family brought her great joy during the “farm days” in Remington, IN. Evelyn is survived by her sisters, Betty J. Macy and Marilyn A. Galema (Chuck). She (Aunt Gertie) is also survived by nieces, Jean Macy and Melissa McKinnis (Mike), and nephews, Tim Galema (Bev) and Dennis Macy (Rita). Evelyn was preceded in death by her nephew Bill Macy (Sharon). She had fond memories of planting flowers at Galema’s Greenhouse, laughing with the Russell sisters and enjoying delicious holiday meals that were always topped with love. To protect family and friends during these unprecedented times, the Graveside Service will be private. Evelyn will be laid to rest beside Nicholas C. Brant at Tippecanoe Memorial Gardens on Friday, May 8, 2020. Hippensteel Funeral Home assisting family with arrangements. In lieu of flowers, memorial gifts may be made to the American Heart Association or a charity near and dear to your heart. Please share memories and condolences online at www.hippensteelfuneralservice.com

Evelyn (Evie) Gertrude (Gert) Brant-Graf, age 87, of Zionsville, IN passed away Wednesday, May 6, 2020 after her battle with the Covid-19 virus. On December 29, 1932, Evelyn was born at Home Hospital in Lafayette, IN to Margaret A. (Lecklitner)... View Obituary & Service Information

The family of Evelyn Gertrude Russell Brant-Graf created this Life Tributes page to make it easy to share your memories.