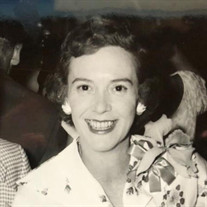 Faye Herr Groves, a longtime resident of Lafayette and West Lafayette, died early Thursday at Westminster Village, a retirement community. Groves, who was 99, died of the complications of old age. A homemaker, world traveler and self-avowed arts advocate, Groves was born in Anderson, Ind., on May 29, 1920. Her parents were Nora Gertrude (Ringer) Herr, a teacher, and Leon Herr, owner of a Chevrolet dealership in Lawrence, Ind., northeast of Indianapolis. As an older adult, Groves learned that she had been adopted. She never discovered the identity of her birthparents. After graduating from Lawrence High School in 1938, Groves briefly studied business at Butler University then worked as a secretary at Fort Benjamin Harrison in Lawrence during World War II. She met Francis A. Groves Jr., who was serving in the U.S. Army. They wed in May 1946 and remained married until his death in May 2011. For a time, Frank Groves worked as a broker in his father’s hide business in Buffalo, N.Y., where his and Faye’s first daughter, Sally, was born. They moved to Indianapolis, where their younger daughter, Martha, was born. Frank Groves became a truck driver and then salesman for Amoco, or Standard Oil Co. (Indiana). The family lived for a time in Crawfordsville, then in 1960 moved to Lafayette. After retiring from Amoco, Frank sold advertising specialties for Newton Manufacturing, with regular assists from his wife. Faye Groves worked for a time as an executive secretary for the Indiana Mental Health Assn. She also was a Girl Scout troop leader and a longtime member of St. John’s Episcopal Church in Lafayette. She was fond of recalling an episode from her troop leader days in Crawfordsville. One day during the 1950s, she and her friend Gertrude Kitts, the troop co-leader, took their racially mixed teenage scouts to a local soda fountain to get ice cream sundaes. The owner was not keen on having African American girls sit at the counter. Groves said to him: “Do you want to battle Faye Groves and Gertrude Kitts and the Girl Scouts of America?” All of the girls sat at the counter. Throughout her long life, Groves traveled extensively in North America, Europe and Asia, often with her granddaughter Sarah Elizabeth Snyder. In 1994, she journeyed with Martha to China, serving as a valuable pair of experienced hands when Martha adopted a Chinese foundling, Nora Tai-Xiu Groves. Writing about the trip in a July 1995 story for Tidings, the newspaper of the Episcopal diocese of Indianapolis, Groves wrote with eerie prescience: “China is beautiful, wonderful, mysterious and rapidly emerging as a power on the world scene. What happens there will affect each of us at some time.” Known for her feistiness and often tart sense of humor, she was an award-winning contract bridge player, an avid reader, a talented watercolorist and seamstress, a weekend golfer and an inveterate writer of letters to the editor. She was active in Republican politics and the (Army) Reserve Officers Assn. Ladies. She supported a number of arts organizations and attended myriad concerts, plays and exhibitions in Lafayette and throughout the world. She and Frank enjoyed entertaining a house full of friends of all ages. She instilled in those near her a cardinal rule: If someone gives you a gift, you send a proper thank you note through the mail. In addition to daughter Martha and granddaughter Nora, of Los Angeles, she is survived by daughter Sally (Groves) Swenson and son-in-law David Swenson, of Redlands, Calif.; two other grandchildren, Sarah Snyder, of Vernon Hills, Ill., and Thomas Craig Snyder; a great-grandson, Gordon Kirkchaiwon Snyder; and several nieces and nephews. Her cremated remains will be interred at Fort Sheridan Post Cemetery in Fort Sheridan, Ill., alongside her late husband’s. In lieu of flowers, please consider donating in her name to the Lafayette Symphony Guild, the Art Museum of Greater Lafayette or another arts organization. Once the coronavirus crisis has passed, the family will organize a memorial at St. John’s or Hippensteel Funeral Home. Share memories and condolences online at www.hippensteelfuneralservice.com

Faye Herr Groves, a longtime resident of Lafayette and West Lafayette, died early Thursday at Westminster Village, a retirement community. Groves, who was 99, died of the complications of old age. A homemaker, world traveler and self-avowed... View Obituary & Service Information

The family of Faye Herr Groves created this Life Tributes page to make it easy to share your memories.