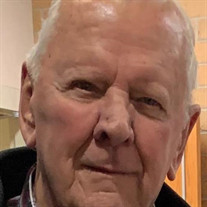 Floyd “Bud” Blackburn Bud was born Dec. 7, 1930 in Jasper County Indiana and raised in Francesville by Stella & Jacob Goble. He passed away on Aug. 19, 2019 at The Springs in Lafayette Indiana at 9:41am. He married Velma (Warmbrod) Blackburn on Nov. 24, 1955 in Delphi Indiana and she passed away on Nov. 16, 2015. Bud worked at Kingsbury Railroad Munitions Plant during the Korean War and that’s when his interest in trains began. He loved collecting railroad lanterns and railroad memorabilia throughout his life. After he met Velma they moved to Lafayette and he began working at Ross Gear (TRW) and worked there from 1955 until his retirement in June 1991. Bud enjoyed square dancing with his wife for many years and they belonged to the Four Squares, Square Dance Club. After his wife passed away he took a real interest into playing Euchre as often as he could. He even had planned on going to play Euchre on Tuesday Aug 20th before passing away on Monday. He played at many different locations, such as St. Lawrence, Grace United Methodist Church, The Eagles and also with the Alcoa retiree group at the Senior Center. He enjoyed all the friendships he made at all the card games. Bud also enjoyed the Indianapolis 500 and attended the 100th race with his family that he received as a Christmas gift from them. He loved to travel and was so happy that he had made it to all 50 States. He thoroughly enjoyed all five of his children and their families, and always had a crowd visiting him when he was in the hospital and The Springs most recently. Preceding him in death is his wife Velma, mother Ruth Bliss and stepfather Jack Bliss, father Merle Blackburn, brother Melvin Blackburn, half-sister Aletha Kain and grandson Tony Toman. He is survived by his children, Debbie McGlothlin (Rick), Don Blackburn (Jan), Bonnie Lutz (FN), Connie Garcia (Benny), Ron Blackburn and half-sister Neoma Boze, followed by 14 grandchildren, 15 great-granchildren and 4 great-great-grandchildren. His family would like to express a “special thank-you” to all the nurses at Franciscan Rehab, the nurses and staff in the Wabash Ave Wing at The Springs, and the Hospice Group-Elara Caring for all the professional care and compassion they showed him during this part of his life. Visitation will be held from 5pm – 8pm Thursday, August 22, 2019 at Hippensteel Funeral Home. Funeral service will be 10am Friday, August 23, 2019 at the funeral home with interment following at Rest Haven Memorial Park. In lieu of usual remembrances, contributions may be directed to The Springs Activities Department, Elara Hospice Group, or Northside Community Center on Elwood Ave. Share memories and condolences online at www.hippensteelfuneralservice.com http://videos.lifetributes.com/1019120

The family of Floyd "Bud" Blackburn created this Life Tributes page to make it easy to share your memories.