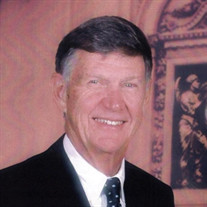 Saturday, September 18, 2021, Fred slipped peacefully from the bonds of this earth into God’s loving and comforting arms. With grieving hearts, we know that he is in a better place. Fred was born in 1930 in Evansville, Indiana to Hazel and Herbert Fillmore, who were recently returned to the United States from China, where they served as Christian Missionaries for 5 years. While in Evansville Fred earned the rank of Eagle Scout, graduated from Evansville Bosse High School, and began his lifelong avocation of playing trombone in Jazz and Dixieland bands. In 1948 Fred began his pursuit of becoming a dentist, graduating from Indiana University, then attending and graduating from Indiana University Dental School. Following Dental School, he served in the United States Air Force as a dentist in Okinawa with the rank of Captain. Returning to civilian life, he started his practice in West Lafayette, where he enjoyed a career with incredible patients, who he remembered and reminisced about throughout his life. These reminiscences were shared with his remarkable Dental Assistant, Ann Feaster, who was with him for 33 years, and Marti Parker, his Office Manager, for 18 years. Fred’s marriage to Rosemarie Boss, (deceased), of Bern, Switzerland gave him his three children; Mark Fillmore, wife Lara, of Bellanzona, Switzerland, Eric and Theres Fillmore of Seattle, WA, and grandson Samuel of Seattle, WA. Later in life Fred was married to Pat King, (deceased), and welcomed her two sons, Jeff King, wife Debbie, of Indianapolis, IN and Chris King, (deceased). In 1999 Fred married Carol Trost, and became step-father to Julie Cooper, husband Pete, of Lafayette, IN, Kristen Trost, of West Des Moines, IA, and Melissa Trost, of Greenwood, IN. Fred also became the dearly beloved grandfather to Amy Cooper Joo, husband Taeha, of Mission Viejo, CA and Rachel Cooper, of Versailles, France. Fred was very active throughout his life in his churches and favorite organizations. He was a Charter Member, Elder, and Choir Member in Covenant Presbyterian Church in West Lafayette. A Charter Member and Choir Member in Christ Presbyterian Church of Longboat Key, FL, a member of Faith Presbyterian Church, West Lafayette. Also, he was a Chairman of the Lafayette Committee of Young Life from 1975 to 1981. Fred’s participation in organizations included Alpha Tau Omega Fraternity, Delta Sigma Delta Dental Fraternity, Singing Hoosiers at Indiana University, Charter Member of the Bach Chorale in Lafayette, President of the Student Union Board of the Indiana University Medical/Dental Campus, Indiana State Board of Health Dental Division, Life Member of the Indiana Dental Society (being Honor Member in 1996), and President of the West Central Dental Society in 1975. Fred’s love of, and participation in, music also included his lifelong joy of playing his trombone. He played locally with the Crusty Crumbs Dixieland Band for 20 years, and the Cherry Lane Dudes for 9 years. He played with The Sea Notes Jazz Band in Longboat Key, FL for 8 years. Last but not least, Fred LOVED the Chicago Cubs. When The Tribune Company still owned the Cubs, Fred became a stockholder in the Cubs! Needless to say, 2016 was what Fred considered one of the best years of his life! As Fred was a lifelong giver to The Salvation Army, the family requests any memorials to be directed in his name to this worthy organization. A Graveside service will be held 10:30am Friday, September 24, 2021 at Tippecanoe Memory Gardens. Share memories and condolences online at www.hippensteelfuneralservice.com

Saturday, September 18, 2021, Fred slipped peacefully from the bonds of this earth into God&#8217;s loving and comforting arms. With grieving hearts, we know that he is in a better place. Fred was born in 1930 in Evansville, Indiana to Hazel... View Obituary & Service Information

The family of Dr. Frederick Fillmore created this Life Tributes page to make it easy to share your memories.