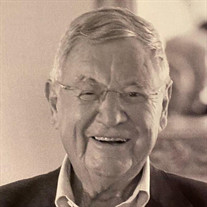 Frederick Ross Ford, 85, passed away on September 3, 2021 in Lafayette. Born March 25, 1936, in Kentland, Indiana, he was the son of the late Marie Jeanne Ross and Merl Jackson Ford. He attended Brook High School, where his favorite subjects were chemistry and geometry, and he played on the basketball team. When his father purchased an 80-acre farm, Fred’s free time was spent on a tractor. On May 31, 1959, he married Mary Adeline Harrison in Indianapolis, and she survives. Fred earned three degrees from Purdue University: BS Mechanical Engineering (1958), MS Industrial Management (1959), and PhD in Industrial Management with a concentration in Organizational Theory (1963). He was awarded an Honorary Doctorate from the Krannert School of Management in 1998. Fred began his career at Purdue in 1959 as Assistant to the Business Manager and was promoted to Vice President and Treasurer in 1974, and Executive Vice President and Treasurer in 1975, a position he held until his retirement in 1998. As Executive Vice President and Treasurer of Purdue University, Fred served as Treasurer to the Board of Trustees and Chief Financial and Business Officer of the University. He managed all of the securities, properties, funds and trust funds belonging to the University and was responsible for all business and financial affairs including preparation and control of the budgets, administration of contracts and grants, purchasing, personnel functions, administrative data processing, transportation, airport and other service facilities, internal audit and investments. He was also responsible for the planning, financing, development, maintenance, and operation of the physical plant of the University and all residence halls and housing facilities. Upon his retirement, the university named a new dining court in his honor. He insisted it be called, “Fred and Mary Ford Dining Court.” In 1998, Purdue honored Fred and Mary with the Order of the Griffin, in recognition of their lasting contributions to the University. Fred was a long-time member of Central Presbyterian Church in Lafayette and was involved in numerous service organizations, including: Delta Upsilon International Fraternity, Lafayette Rotary Club, Board of Trustees Central Presbyterian Church, University Club-Purdue University, Purdue University Retirees Association, Purdue University Deans of Libraries Advisory Committee, Westminster Village Foundation. In addition, he was President, Greater Lafayette Chamber of Commerce (1978-79); Member, Board of Directors of United Way of Greater Lafayette and Tippecanoe County, (1973-1975); Trustee, Teachers Insurance and Annuity Associate (TIAA); National Association of College and University Business Officers—Honored in 1989 as Distinguished Business Officer (NACUBO’s highest award). In 1994, Governor Evan Bayh appointed him Sagamore of the Wabash. In retirement, Fred enjoyed time with family and friends, travel, philanthropy, fishing in the Everglades, and spending time on Lake Maxinkuckee in Culver, Indiana. In addition to his wife, he is survived by his three children and five grandchildren: Lynne Elizabeth Ford (husband, Frank Dirks; children Grace and Samuel Ford-Dirks) Charleston, SC, Steven Harrison Ford (partner, Ron Rumford) Philadelphia, PA, Katherine Jeannette Ford Maye (husband, John Paul Maye; children Jack, Alexander, Claire Maye) Great Falls, VA; and a sister, Judy Kay Ford Whaley (husband, Dave Whaley). He is preceded in death by his parents, and a sister, Phyllis. A Celebration of Life and Memorial Service is planned for November 13, 2021 at 1:00pm at Central Presbyterian Church (31 N 7th St, Lafayette). Masks are required. A reception will follow in the Large Fellowship Hall. In lieu of flowers, please consider making a gift to the Frederick R. and Mary H. Ford Endowment Fund at The Community Foundation of Greater Lafayette. Share memories and condolences at www.hippensteelfuenralservice.com

Frederick Ross Ford, 85, passed away on September 3, 2021 in Lafayette. Born March 25, 1936, in Kentland, Indiana, he was the son of the late Marie Jeanne Ross and Merl Jackson Ford. He attended Brook High School, where his favorite subjects... View Obituary & Service Information

The family of Frederick Ross Ford created this Life Tributes page to make it easy to share your memories.