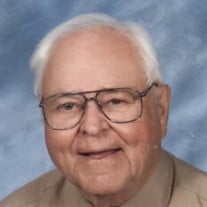 George Edward Hamrick, age 93, died peacefully at Mulberry Health, Mulberry, Indiana on September 17. Alzheimer’s Disease was not his friend. He was a good man. He lived a good life. If you met him you remembered him and the twinkle in his eyes. George was born in Cullman, Alabama to the late Lee and Mary Hamrick and raised in Hanceville, Alabama. He ran off to see the world as a US Merchant Marine at 18. This stint springboarded him into the US Army Signal Corps, where he became a radio operator, Morse Code phenom (“dit” “dah”) and ultimately achieved the rank of 2nd Lieutenant in the US Army. The GI Bill provided an opportunity for him to earn an engineering degree from Auburn University (War Eagle!) and this led to a 38-year career as a systems engineer at RCA north of the Mason-Dixon Line in Indianapolis, Indiana. George was a fixture at Prentice Little League in Indianapolis over his many years as a team manager, was a world-class tinkerer, Mr. Fixit, the fun Uncle George to dozens of nephews and nieces, and was clear about the importance of frugality, education, and problem solving to succeed in life. He reveled in annual summer road trips from Indianapolis to Cullman, Alabama to attend Hamrick and Robinson family get-togethers, which always included bootlegging adult beverages for friends and family to the “dry” county. Upon his well-earned retirement these summer trips evolved into winter snowbirding in Gulf Shores, Alabama for many years, where he could be found strolling the white sand beaches every morning. Few things brought him as much joy as spending time with his grandchildren and this joy was enthusiastically reciprocated. He was known for grilling sirloin steaks to perfection (medium rare), was a firm believer in the eat part of peel ‘n eat shrimp, retreated to his happy place in a La-Z-Boy recliner after long days of hard work, was an unofficial national spokesperson for the wonders of duct tape, and learned and shared the importance of fairness and equality and honesty throughout his life on a daily basis. He was preceded in death by his lifelong sweetheart, wife and partner-in-crime of 50 years, Ethelene Robinson Hamrick, Indianapolis, IN; his brothers Hoyt, Kerr, TX, Arthur, Orange Beach, AL; his sisters Dot, Foley, AL, Ruth, Cullman, AL, Inez, Cullman, AL, Esther, Jacksonville, FL. He is survived by his four sons; James (Tracy Wise), York, PA; Charlie (Peggy Johnson), Lafayette, IN; John (Brenda), Gulf Shores, AL; Steve (Linda), Noblesville, IN; ten grandchildren and three great-grandchildren. The family of George Hamrick would like to extend a sincere heartfelt thanks to all the health care providers, nurses, aids, and staff at Mulberry Health, Mulberry, IN and Rosewalk Commons, Lafayette, IN. Your years of attention, kindness, care, compassion, and love are unequaled. A Life Celebration Memorial Service will be held on October 17 at Moss Service Funeral Home, 1901 2nd Ave NW, Cullman, AL, at 12 noon, followed by a graveside ceremony at Hopewell Cemetery, Hanceville, AL. Memorial contributions may be made to the Alzheimer’s Association (https://www.alz.org). Share memories and condolences online at www.hippensteelfuneralservice.com

George Edward Hamrick, age 93, died peacefully at Mulberry Health, Mulberry, Indiana on September 17. Alzheimer&#8217;s Disease was not his friend. He was a good man. He lived a good life. If you met him you remembered him and the twinkle in... View Obituary & Service Information

The family of George Edward Hamrick created this Life Tributes page to make it easy to share your memories.