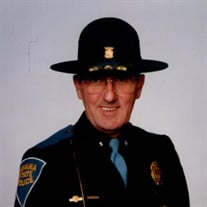 George H. Ross, 83, of Lafayette, IN enjoyed life to the very fullest until his death on Friday, January 10, in Lafayette, Indiana. George was born Alexandria, IN, September 28, 1936, the son of the late George H. and Virginia M. (Farina) Ross. He was a graduate of Alexandria High School. George proudly and honorably served his country in the US Army when he was honorable discharged in 1963. Then spent most of his adult life in law enforcement, he served in the Indiana State Police from 1961 until 1990 where he earned the rank of Sgt of Detectives being awarded the Sagamore of the Wabash. After retiring from the State Police, he served from 1990 until 2007 on the Tippecanoe County Sheriff Dept. George, WE THANK YOU FOR YOUR SERVICE. After serving Forty-Seven years in Law Enforcement George was still not able to retire, he then for a brief time worked at Kirby Risk, also with Certified Firearms Solutions and finishing out the remainder of his working career went to work at Caterpillar as a Security Officer for eight years. He was a member of America Legion Post #11, National Rifle Association of America (NRA) Life Time Member, Fraternal Order of Police, Knights of Columbus, Wildcat Hunt Club and a member of St. Ann’s Catholic Church. Left behind to remember George are his three sons. George “Randy” (Karla) of West Point, John (Tricia) of Romney and Anthony (Kim) of Lutsen, Minnesota, three grandsons, John “Johnny”, G. Ryan and Travis. One brother Louis Farina Ross of Fort Wayne. Visitation will be held 11am – 1pm on Wednesday, January 15, 2020 at St. Ann’s Catholic Church. Funeral Mass will begin at 1pm at with Father Dominic Young officiating. Military Honors will follow service. If friends desire, memorials may be directed to Indiana State Police Alliance. After the service come join us in celebrating the life of George H. Ross. We are gathering at the American Legion Post 11. 1801 S 9th St Lafayette, IN. Share memories and condolences online at www.hippensteelfuneralservice.com http://videos.lifetributes.com/1047290

George H. Ross, 83, of Lafayette, IN enjoyed life to the very fullest until his death on Friday, January 10, in Lafayette, Indiana. George was born Alexandria, IN, September 28, 1936, the son of the late George H. and Virginia M. (Farina) Ross.... View Obituary & Service Information

The family of George H. Ross created this Life Tributes page to make it easy to share your memories.