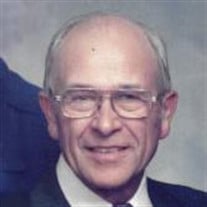 Gerald Alfred Peterson, age 102, was born in Indianapolis on January 3rd, 1917 to Swedish immigrant John Sigfrid Peterson and Norma Lee Wiseheart of Kentucky. He remembered the horse-drawn milk wagons and the Model T days of dirt road travel with his parents and two brothers. Together with their dad, a tool and die maker, they made wooden race cars to sell at the Indianapolis 500 in the 1920s, an annual event that became deeply meaningful to the entire family. Jerry graduated from General Motors Institute (now Kettering University) with a specialty in mechanical engineering. Like others of the “Greatest Generation," Jerry was a kind of a living history book. While his two brothers served in WWII, Jerry, whose poor vision prevented him from enlisting, was part of the effort on the homefront. After graduation he worked for Boeing Aircraft in Seattle as the company went into high production for the war. While there he helped design parts of the B-17 and other planes, with patents in his name. (His experiences on the Pacific coast during that time are archived in the Center for Pacific War Studies at the National Museum of the Pacific War—the Admiral Nimitz Museum—in Fredericksburg, Texas) During his ten years at Boeing, he enjoyed fishing in Puget Sound and, most of all, sunny weekends serving with the ski patrol on nearby Mount Rainier. He fondly remembered giving rides to teenage Jim Whittaker, later the first American to reach Everest’s summit, and his twin Lou, who also made the ascent and spent his life as a mountaineer guide on Rainier. Jerry’s life changed in wonderful ways when, after a move to Ford Motor Company in Dearborn, Michigan, he met the love of his life, Marilyn Young, the librarian-teacher daughter of an English tool maker at Ford. She had responded to an ad for the Ford Thunderbird Ski Club, which Jerry founded in 1949 with thirteen members. (The club now boasts hundreds of members.) In 1960, Jerry took a job with Westinghouse in Pittsburgh, Pennsylvania. For a short time, he also worked for Argus Camera and the Veteran’s Administration in Washington, D.C., always saving for his lifelong dream of owning a farm back in Indiana. In 1965 he bought that farm near Winamac, Indiana, his greatest pride and joy. To honor their parents, the family will be retaining ownership of the property. Jerry’s family and friends will remember him for his love of travel, nature, and the great outdoors, his special way with animals, and his interest in photography, passions he instilled in his children and grandchildren. Perhaps most of all, everyone will remember him for his endless love of telling stories. Jerry is preceded in death by his beloved Marilyn, and his two brothers, Victor and Howard Peterson. He is survived by his children, Mary Elizabeth Zundo, James Gerald Peterson, grandchildren Andrew Zundo, Erik Zundo, Michael Peterson, Samuel Peterson, Emma Peterson, son-in law Dr. George Zundo, daughter-in-law Gail Dyer, granddaughters-in-law Kristyn Zundo and Menglan Peterson, and great-grandchildren Jack, Luke, and Liam Zundo. Visitation will take place 10 a.m. Friday, June 7, 2019 with service and burial at 11 a.m. at the Hippensteel Funeral Home, Lafayette, Indiana. In lieu of flowers family asks that donations be made to the Tippecanoe River State Park, one of his favorite places. https://www.in.gov/dnr/parklake/2965.htm Donations sent to the funeral home will be collected and donated to the park in his name. Share memories and condolences online at www.hippensteelfuneralservice.com

The family of Gerald Alfred Peterson created this Life Tributes page to make it easy to share your memories.

Gerald Alfred Peterson, age 102, was born in Indianapolis on...