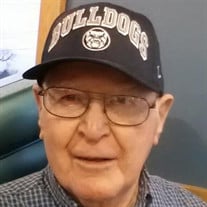 Lafayette, IN - H. Keith “Stan” Stanfield, of Lafayette, Indiana, passed away peacefully on October 19, 2020. He was 93. Keith was born on August 27, 1927 to Clifford and Charlotte Stanfield. A lifelong resident of Lafayette, he was the last living member of their five children. Keith was preceded in death by his wife Catherine (Cox) Stanfield. He was also preceded in death by his parents, his brothers Lynn (Margaret) Stanfield and Richard (Clara) Stanfield, and his sisters Vera (Arthur) Conkright and Doris (Floyd) Timmons. Keith grew up in the north end of Lafayette. He attended Longlois School and graduated from Lafayette Jefferson High School in 1945. In high school, he was active in the bowling club. He continued to bowl in city leagues for many years. After graduation, Keith enlisted in the United States Army. After his service in the Army, Keith returned to Lafayette and managed the shoe department at the downtown J.C. Penney department store. His passion, and most of his career, was spent in the automotive business. Keith owned his own car business in Lafayette, Stan's Auto Sales. Previously, he had worked for Fireproof Garage Chrysler-Plymouth in Lafayette, and later as a manager for Hendrickson Ford in Logansport. He restored several antique and classic cars. He was a life-long member of the Brown Street United Methodist Church, serving as usher, choir member, and Sunday School Superintendent. Keith was also a 71-year Master Mason in the Lafayette Masonic Lodge, and an avid Chicago Cubs fan. Keith’s greatest joy in life was the time spent with family and friends. He is survived by his four children, Lorri (Don) Perigo, Doug (Josey) Stanfield, Rob (Jennifer) Stanfield, and Mike (Charity) Stanfield. He is also survived by his grandchildren, Chris, Jeremy, Josiah, Jesse, Nathan, Harvey, Melissa, Heather, Danielle, Abigail, Allegra, Zion, and Kaden, several great-grandchildren, and his former wife, Elizabeth Stanfield. The family will receive friends on Friday, October 23rd from 5pm until the Masonic service at 6pm at the Hippensteel Funeral Home, Lafayette. Funeral service will follow with Reverend Ryan Traeger officiating. Military Honors will be led by the American Legion. As a life-long member of the Brown Street United Methodist Church, the family requests that memorials be made in Keith's name to the Brown Street Church, 905 Brown St, Lafayette, Indiana, 47904. Current Covid-19 precautions will be observed along with social distancing. Masks are required. Share memories and condolences online at www.hippensteelfuneralservice.com http://videos.lifetributes.com/1097573

The family of H. "Stan" Keith Stanfield created this Life Tributes page to make it easy to share your memories.