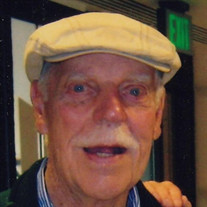 Henry Wynstra, 96, went peacefully to heaven on September 27, 2021. For him, the “Sweet By-and-By” is now. Because of the mercy and grace of our Lord, he finished well. “But thanks be to God, who gives us the victory through our Lord Jesus Christ.” (1 Corinthians 15:57) Henry was born on April 9, 1925, to Dutch immigrant parents, Alle and Hinke Wijnstra. When their ship landed at Ellis Island in 1912, they changed their names to Alex and Henrietta Wynstra. From there, they settled in Racine, Wisconsin. Henry was the 8th child of 14 children, affectionately known as Henry the 8th. He was the first of his family to graduate from William Horlick High School. After graduating from high school, he enlisted in the Army Air Corps, serving in WWll for two and a half years. He was a top turret gunner on a B24 aircraft, serving on 13 missions. He received multiple medals and awards, including a letter of commendation from George C. Kenney, the Commanding General of the Far East Air Forces. After his service in WWll, he attended the University of Wisconsin in Madison and then graduated from the Marquette University School of Dentistry in 1951. After that, he served as a dentist during the Korean War, based in Augusta, Georgia. He married Margaret A. Schneider on March 24, 1951. After his service in Georgia, they settled in Racine, Wisconsin. There he practiced dentistry and raised 7 children. At age 62, he retired from dentistry, moved to Greenville, Illinois, and enrolled in Greenville College. After 4 years, he graduated with a degree in Art. He was very creative and skilled with a diversity of media: water color, pastel, oil, acrylic, ceramics, bronze casting, and sculpture. He has many examples of his art work displayed in a number of places. He and Margaret moved to Lafayette, Indiana in 1997. During the last 10 years of his life, he volunteered at The Farm at Prophetstown as a tour guide of the farm house. He loved the staff and the visitors. He demonstrated the 1927 player piano with gusto, made fires in the kitchen stove, and enjoyed relaxing on the front porch. He was known to say, “If you have a psychological hang-up of any kind, just come to the Farm and it will go away.” Henry lived at the Indiana Veterans Home from 2016 until the day of his death. He was very content with life there, and greatly appreciated the kind and thoughtful staff. He was raised in the Dutch Reformed Church. During his lifetime, he attended Racine Bible Church, Greenville Free Methodist Church, and Good Shepherd Baptist Church of Lafayette. During the past 5 years, he attended the services at the IVH. He received much spiritual help from his beloved chaplains, David Hess and Tom Covington. Henry is survived by his dear wife of 70 years, Margaret (also affectionately known as “Susy”) and their children, Ruth O’Connor (Thomas, deceased), Sharon Ballard (Randy), Priscilla Witte, Peg Plucker (John), Jim Wynstra (Lori), Rachel MacKinney (Ted), and Jonathan Wynstra (Martha). His only surviving siblings are Henriette and Bernard. He has 19 grandchildren and 25 great-grandchildren, with another baby on the way. Visitation will be held at the Chapel in the center of the circle drive of the Indiana Veterans Home, 3851 N River Rd, West Lafayette, Indiana, on Monday, October 4, 2021 at 9:00 a.m. with funeral services immediately following at 10:00 a.m., Chaplains David Hess and Tom Covington officiating. Burial with military honors will be on the grounds of the Indiana Veterans Home after the service. a live webcast of the funeral service will be available on our website - www.hippensteelfuneralservice.com. In lieu of flowers, memorial contributions may be made to the Indiana Veterans Home or The Farm at Prophetstown. Share memories and condolences online at www.hippensteelfuneralservice.com To watch the funeral service go to the photo and video tab. To watch graveside honors please follow this link, https://webcasts.lifetributes.com/1166330 Click on the link below to watch the webcast of the funeral service for Henry Wynstra. https://webcasts.lifetributes.com/1166328 This is the link for the funeral service and there will be a separate link for the military honors at graveside. Click on this link below to watch the military honors webcast for Henry Wynstra. https://webcasts.lifetributes.com/1166330

The family of Henry Wynstra created this Life Tributes page to make it easy to share your memories.