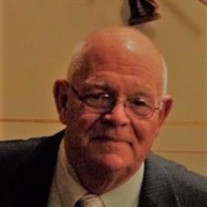 Howard Stanley “Stan” Cronk Jr., 78, of Lafayette, formerly of Flora, passed away Monday, February 25, 2019 at St. Elizabeth East Hospital. He was born February 22, 1941 in Anderson, IN to the late Howard S. Cronk Sr. and Ella Marie (Hoppes) Cronk. He attended and played football for the University of Illinois, before transferring to Ball State where he obtained his Bachelor’s degree. After graduation he taught history and coached football at Carroll Consolidated High School for three years. He then went on to work for Rugby Laboratories as a Pharmaceutical Sales Representative for 15 years. His first marriage was to Anna Marie Guckien. She preceded him in death on January 14, 2012. On January 3, 2015 he married Tamara Bougher and she survives. He enjoyed reading and writing, drinking coffee with his friends at the Corner Café and spending his winters in Florida. Most of all he loved spending time with his grandchildren and watching them play sports. Stan was a past member of the Knights of Columbus and St. Joseph Catholic Church. Surviving along with his wife Tamara, are his children: Nicklaus Hayes (Karla) Cronk of Lafayette, Gabrielle Ann (John) Bingaman of Logansport; Stepchildren: Mark (Beth) Bougher of Lafayette and Laura Elaine (John) McLaughlin of West Lafayette. He is also survived by his beloved grandchildren: Elizabeth, Katherine and Victoria Bingaman, and Hayes and Coy Cronk; and step-grandchildren: Kasey (Nathan) Hunsowitz, Hannah, Abby and Emma Bougher. He is preceded in death by his parents and one infant daughter. Visitation will be held from 9:30am – 11am Friday, March 1, 2019 at St. Joseph Catholic Church with Funeral Mass at 11am. Father Clayton Thompson will officiate. Interment to follow at Maple Lawn Cemetery. In lieu of usual remembrances, contributions may be directed to the Flora Public Library – 109 N Center St. Flora, IN 46929 or Flora Little League Incorporated – 616 East Columbia St. Flora, IN 46929. Hippensteel Funeral Home and Tribute Center - 405 Cottage St. Delphi in charge of arrangements. Share memories and condolences online at www.hipppensteelfuneralservice.com http://videos.lifetributes.com/958171

The family of Howard Stanley "Stan" Cronk Jr. created this Life Tributes page to make it easy to share your memories.