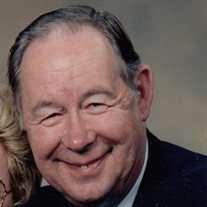 Jack T. Ehresman passed away peacefully on Tuesday, February 2, 2021 in West Lafayette, Indiana at the age of 90 years. He was born on April 29, 1930 to William Earl and Alta Flo (Niehard) Ehresman in Lafayette, Indiana. Jack graduated from West Lafayette High School, and attended Purdue University after serving in the U.S. Air Force. Jack was married for over 50 years to Ruth A. Farrell, who preceded him in death. Together they had three children: LuAnn (James) Featherston, D. Gregory (Carrie) Ehresman, and John M. Ehresman. Jack was employed at the U.S. Postal Service until retiring at age 50, when he and Ruth purchased the Triple XXX Restaurant in West Lafayette, which had been a long-held dream of his. He assisted some of his workers through their long process of achieving U.S. citizenship. They later sold the restaurant to Greg and Carrie Ehresman in 1999. Jack and his wife purchased a 100 acre ranch with a winding, spring-fed creek in West Lafayette, yet another dream, and raised their kids, dogs, horses, and a few cattle. He built a bridge over the creek, a pole barn, a 30’ deep 1.5 acre pond, and a large screened in porch for steak cookouts in the summer. Jack greatly enjoyed nature and the outdoors, including long walks in the woods or field with his binoculars, target shooting, and following wildlife tracks. He also enjoyed music, especially jazz, dancing, movies of all genres, and travel adventures. He was a voracious reader, and always had a current book by his side at home. He is preceded in death by his parents, his wife, and his son, John M. Ehresman. He is survived by his children LuAnn (James) Featherston, D. Gregory (Carrie) Ehresman; two sisters Lucille Blosser, Pat (Max) Morehouse; one brother Dean Ehresman; three grandchildren Samantha Ehresman, W. Stacey Featherston, J. Randall (Sheila) Featherston; two great grandchildren J. Tyler Featherston, Trevor P. (Haley) Featherston; lifelong friend Nate McKenzie; numerous nieces, nephews and extended family members; and countless friends in business and life. A private family service was held on February 3, 2021. A celebration of life will be held at a future date. Hippensteel Funeral Home is entrusted with care. Share memories and condolences online at www.hippensteelfuneralservice.com

Jack T. Ehresman passed away peacefully on Tuesday, February 2, 2021 in West Lafayette, Indiana at the age of 90 years. He was born on April 29, 1930 to William Earl and Alta Flo (Niehard) Ehresman in Lafayette, Indiana. Jack graduated from... View Obituary & Service Information

The family of Jack T. Ehresman created this Life Tributes page to make it easy to share your memories.