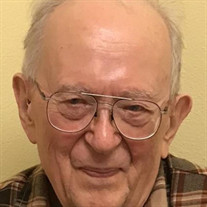 Dr. James H. “Jim” Brewster, 98, of West Lafayette passed away Sunday, October 4, 2020 at Franciscan Health Lafayette East Hospital. Jim was born August 21, 1922 in Fort Collins, CO, to the late Oswald Cammann Brewster and Elizabeth Ramsey (Booraem) Brewster. He described his early years as: “born in the blue-mountain state of Colorado, raised among the sage foothills of Wyoming and on the banks of the great Missouri, and grown to young manhood among the low hills of Connecticut.” Jim graduated from Cornell University in 1942 with a Bachelor’s degree in Chemistry. While there he served on the staff of the literary magazine and was moderately active in the small prewar civil rights and anti-war movement. Graduating shortly after the United States entered World War II, he worked for a year as a chemist at a refinery in Philadelphia. He was rejected by the armed services for poor eyesight and joined the American Field Service, serving as an ambulance driver in both forward and rear areas with Canadian, New Zealand, Indian, Gurkha and Italian units of the British 8th Army through most of the Italian campaign including the Battle of Monte Cassino. In the spring of 1945, his unit was transferred to the British Liberation Army in northern Germany and took part in the evacuation of survivors and the care of remains of those who perished at the Belsen Concentration Camp. After a month on leave traveling throughout India, he came back to the US on the Queen Elizabeth ocean liner. Jim obtained his PhD in Organic Chemistry from the University of Illinois in 1947 and then spent a postdoctoral year at the University of Chicago. He was Professor at Purdue University in the Chemistry Department from 1949-1991 and chaired the Faculty Senate in his final year before retirement. Jim authored many professional papers and book chapters in the field of Organic Stereochemistry showing the concept of conformational chirality to be useful in interpreting optical rotatory power. This concept was useful in the development of pharmaceuticals and put into practice through his consulting with Eli Lily. Jim especially enjoyed teaching first-year chemistry. In 1953 Jim met Christine “Chris” Germain, who had come to Purdue on a postdoctoral fellowship in the Chemistry Department. They were married on January 23, 1954. Both Jim and Chris were active participants in the life of the community and University. Both music-lovers, they were long-time season ticket holders to the Lafayette Symphony. Jim was one of the founders of the Fellowship that became the Unitarian Universalist Church in West Lafayette. He was a long-time member of the church, and in 1978 became a lay minister and officiated at the weddings of friends and family. He was also a member of the Indiana Native Plant Society and the American Chemical Society. Throughout his life, Jim enjoyed travel, camping, hiking, nature photography, researching family history, and painting, especially acrylic and oils. After his retirement, Jim took painting classes, and Jim & Chris traveled abroad to the British Isles, New Zealand, Hawaii and Iceland. Jim wanted his to use his life experiences to make a difference and educate others, and had many Letters-to-the-Editor published in the Journal and Courier. He also self-published a selection of his poems documenting his experiences during WWII because, as he wrote, “Now, more than ever, I feel that he [the young man he was] should also be heard, lest we forget - or never know – how some of the men who took part in that war, in the mud, felt about it as they saw it coming, as it swept them up, and as they came at length to understand what had to be done and why.” Jim is survived by his daughters: Tara (Kip) Athan of West Lafayette and Tina (Michael) Brewster-Wray of Martinsville, IN; two grandchildren Helen Sinor of Santa Rosa, CA and Penelope Gatton of Santa Cruz, CA; and brother William Brewster of Duxbury, MA. Along with his wife, Chris, he is preceded in death by his parents, daughter Barbara Anne Brewster and brother Robert Brewster. A memorial service will be held at a date to be determined at University Place, 1700 Lindberg Rd, West Lafayette, 47906. In lieu of usual remembrances, contributions may be directed to The Wabash Center, 2000 Greenbush St. Lafayette, IN 47904; Indiana Native Plant and Wildflower Society, P.O. Box 501528, Indianapolis, IN 46250 or Niches Land Trust 1782 N 400 E, Lafayette, IN 47905. Share memories and condolences online at www.hippensteelfuneralservice.com

The family of Dr. James H. Brewster created this Life Tributes page to make it easy to share your memories.