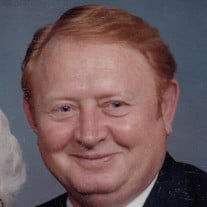 James P. Merimee of West Lafayette, IN passed away on April 16, 2019 at the age of 85. Jim was born on September 11, 1933 in Mattoon, IL to Roger and Meriam Merimee. He graduated from Charleston High School in 1951. After a stint with the railroad, he served in the United States Air Force as a radio operator in Security Service. He later attended Eastern Illinois University and graduated with a degree in History. During his college years, Jim developed a loved of golf while working summers at the country club in Galesburg, IL. Jim moved to West Lafayette in 1961 to work as an auditor for Purdue University where he worked until his retirement in 1993. Jim was an avid golfer, supporter of the Purdue Boilermakers and an all-around sports enthusiast. When he wasn’t golfing or watching Purdue sports, you might find Jim attending antique auctions and shows to round out his collections of Sleepy Eye Pottery, iron dog doorsteps and redhead figurines. And if you were lucky, Jim might take you to his favorite morel mushroom hunting spot. He was a member of the Elks Lodge #143 and First Christian Church. Jim will be remembered as a loving husband, father, grandfather and great-grandfather. He was married to his beloved wife, Nell Merimee, for 44 years. He will be greatly missed by his daughters: Trisha (Scott) Petraglia, Cheryl Bryant, and Laura (David) Ohannesian, his granddaughters: Nikki, Kayla, Sophia and Jordan, and his 7 great-grandchidlren. He was predeceased by his father, Roger Merimee, his mother, Meriam (Gass) Merimee, and his sister, Shirley Bell and son Stephen Phelps. Visitation will be held from 1pm - 2pm Saturday, April 20, 2019 at First Christian Church – 329 N 6th St Lafayette, IN 47901. Funeral service will follow at 2pm with Pastor Andrew Guthrie officiating. Burial will take place at Tippecanoe Memory Gardens. In lieu of flowers, donations can be made to Purdue University Center for Cancer Research or to First Christian Church. Share memories and condolences online at www.hippensteelfuneralservice.com http://videos.lifetributes.com/994390

James P. Merimee of West Lafayette, IN passed away on April 16, 2019 at the age of 85. Jim was born on September 11, 1933 in Mattoon, IL to Roger and Meriam Merimee. He graduated from Charleston High School in 1951. After a stint with the railroad,... View Obituary & Service Information

The family of James P. Merimee created this Life Tributes page to make it easy to share your memories.

James P. Merimee of West Lafayette, IN passed away on April 16,...