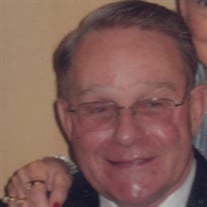 James E. “Jim” Smith, 84, of Monticello passed away Monday, July 6, 2020 at IU Health Methodist. He was born February 22, 1936 in Hobbieville, IN, to the late John and Pansy (Fearnot) Smith. On December 24, 1972 he married Beatrice “Bea” Mullins in Lafayette and she survives. Jim worked for his brother’s company John E. Smith Enterprises in the field until he became president of General Builders, a subsidiary of Smith Enterprises, returning to the field and retiring in 2004. He continued to do home remodeling and maintenance and at the time of this death he was doing land development. He was a member of the Sons of the American Legion, past member of the Elks and Eagles, past president of GLHB and past president and past secretary of the Twin Lakes Regional Sewer District, State Director of Indiana Home Builders Association and National Director of NAHB. Along with his wife Bea, he is survived by his children: Shari (Rick) King of Blytheville, AR, Gary (Ginny) Smith of Lafayette, Candace (Marty) Glaser of Lafayette, Jamie Revalee of Lafayette, Carmen Delph of Lafayette and Cameron R. Smith of Louisville, TN; siblings: Wilbur (Rose) Smith of Delphi, Ronald Smith of Lafayette, Sue (Bob) Jones of Salem, IN, Joanne (Bob) Martin of Bedford and Dorcas (John) Bennett of Ft. Collins, CO. He is also survived by 27 grandchildren, 57 great-grandchildren and 2 great-great grandchildren. Jim is preceded in death by his parents, four brothers Charles, Phillip, Joseph and John Smith and sisters Lois Whitchurch, Martha Harding, and brother-in-law Tom Harding. Visitation will be held from 5pm – 8pm Friday, July 10, 2020 at Hippensteel Funeral Home. Funeral service will begin at 10am on Saturday, July 11, 2020 at the funeral home. Interment to follow at Tippecanoe Memory Gardens. Seating accommodations will be available based on the regulations for Covid-19 and will honor social distancing. Webcasting of the service will be available on our website. Share memories and condolences online at www.hippensteelfuneralservice.com http://videos.lifetributes.com/1077085 https://webcasts.lifetributes.com/1077085

The family of James E. Smith created this Life Tributes page to make it easy to share your memories.