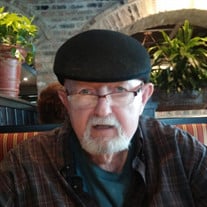 On November 18th, 2020, James Alan Taylor a resident of Wesley Manor Frankfort, Indiana finished his journey here on earth. Born in Morris Illinois on August 5th 1938 to Myron (Mike) and Letitia Foley Taylor. He spent most of his treasured childhood in Morris, Illinois. His family moved to Hammond, Indiana in 1952 where he attended Hammond Tech High School. In 1956, after graduating he enlisted in the United States Navy, serving four years. In 1960 he married Virginia May Grossner and was blessed with four daughters with her. They later divorced and he married Patricia Ann Metzinger in 1982. Jim worked at Illinois Bell, Indiana Bell, AT&T as a cable repair man the majority of his working life. He dabbled in horses and farming with his family in Monon, Indiana and later moved them to Benton County to be closer to his work. After his retirement he opened his own business Leo Electric with his wife Pat and friend Terry Deno. Jim loved the outdoors and going on long motorcycle rides with his Pat and he enjoyed most of all being with his family and friends. He was our genuine Mr Fix It. Leaving behind his sister Susan (Terry) Dobiecki of Cedar Lake, Indiana; his brother Robert’s widow, Marie Taylor of Morris, Illinois; his nephews John Dobiecki of Cedar Lake, Indiana, and Mike (Sherrie) Taylor of Morris, Illinois, Also surviving are his children Valerie (Kevin) Braaksma, Remington, Indiana; Michelle (Ron) Martin of Newburg, Indiana; Brian “Mac” (Emily) McDaniel, Boswell, Indiana; Jennifer Bennett, Oxford, Indiana; Nicole (Jeff) McConnell, Brownsburg, Indiana; and Kathleen (Chad) Hoey, Lafayette, Indiana. Jim also leave behind ten grandchildren: Miranda (Ryan) Wirtz, Justin (Helena) Bennett, Wesley (Alicia) Martin, Emmett (Jess) Albertson, Landon (Lauren) McDaniel, Preston McConnell, Marybeth McDaniel, Addison McConnell, Rebeccah Hoey and SarahBeth Hoey. He was also blessed to have 8 great grandchildren: Abigail, Eden and Savannah Wirtz; Justin, Josie, and Jolene Bennett; Roland Martin; and Sawyer Ann Albertson. Preceding Jim to heaven are his mother and father Myron and Letitia Foley Taylor; his brother Robert Taylor; his wife Patricia Ann Taylor; in laws Leonard and Lucille Metzinger; his nephew whom he helped raise Charles Dean Delaney; and son in law David Lee Bennett. There will be a private family service due to COVID-19. In the spring of 2021 Jim will have a memorial service where all are invited to come and celebrate his life and he will be honored for his service to these United States of America. In lieu of flowers please feel free to make a contribution to either the Shriners, St. Jude and/or the Almost Home Humane Society of Lafayette, Indiana. Share memories and condolences online at www.hippensteelfuneralservice.com

The family of James Alan Taylor created this Life Tributes page to make it easy to share your memories.