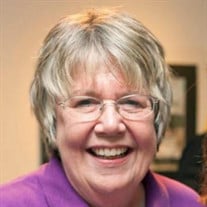 Lafayette Jane Hannah Early Boswell, age 73, of Lafayette, died in her home on July 1. Born November 19, 1947 in Memphis Tennessee, the daughter of Dr. George and Frances Early. On December 27, 1976, she married Jeffrey Boswell. She is preceded in death by her brothers Peter and George. She is survived by her husband Jeff, sister Martha Hall (Bruce), brother Robert Early (Kim). She spent her formative years in Arkansas and then graduated high school in 1965 from Central H.S. in Columbia Tennessee. Her collegiate education began at Syracuse University in New York and then moved to Purdue where she earned a Bachelors degree in Art Education and later a Masters of Arts. in 1977. Later she attended graduate classes in the special ed department at Indiana State University. With her husband Jeff and with her parents, she began a consulting business to remediate persons with learning disabilities. While a student at Purdue, she found time to teach a class of special education students. After graduation, she took a position at Jefferson HS as an Art teacher specializing in ceramics. During that time, she was also a member of the Art Education Association of Indiana, eventually serving as president. Her tenure at Jefferson lasted until 1988 when Multiple Sclerosis prevented her classroom teaching. She touched myriad students’ lives, many of whom remain friends. She found new ways to utilize her creativity and energy by turning to societal challenges. She joined forces with some neighbors to address problems with the neighborhood. They called a meeting, had some refreshments and invited all the neighbors to come. The result of that was the birth of the Ninth Street Hill Historic Neighborhood. She was also an instigator in developing the Fourth of July event, “A Festooned Fourth” and the tradition of luminary that line the hill at Christmas time. Jane served on and contributed to the Tippecanoe County Historic Association board and served as its president, was an elder at Central Presbyterian Church and, with her husband, directed the high school youth group. She worked with Cindy Murray and the Mayor’s Youth Council and helped direct the design and realization of the Lafayette City flag we have today, one that has been praised by the flag experts. As evidence to her impact on the community, she was the recipient of appreciative awards: The George Award, 2002, Crystal Bison 2007, YWCA Women of Distinction 2011, Johanna Downie Award 2013 given by The Trust for Historic Preservation, and the Suzanne Stafford 2014 Award given by the Tippecanoe Arts Federation Family will gather Monday, July 12th for a private burial. On Tuesday, July 13th visitation and memorial service will be held at Central Presbyterian Church. Visitation is at 9:30am, memorial starts at 11:00. In lieu of flowers please consider a donation to the American Cancer society, National Multiple Sclerosis society, your favorite charity, or just give someone you love a good hug. Share memories and condolences online at www.hippensteelfuneralservice.com

Lafayette Jane Hannah Early Boswell, age 73, of Lafayette, died in her home on July 1. Born November 19, 1947 in Memphis Tennessee, the daughter of Dr. George and Frances Early. On December 27, 1976, she married Jeffrey Boswell. She is preceded... View Obituary & Service Information

The family of Jane Hannah Boswell created this Life Tributes page to make it easy to share your memories.