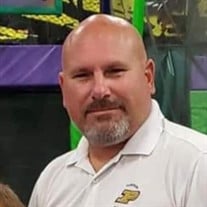 Jason Marcus Howard passed away on September 25, 2021 at the IU Arnett Hospital due to complications from Covid. Jason was born on Nov. 7, 1971 in Lafayette, Indiana to Ted and Jean (Jennings) Howard. He was a 1990 graduate of Delphi Community High School. Always interested in agriculture, he was awarded the highest national honor of American Farmer from the FFA. After graduation from high school, he attended Purdue University. He married Nicole Hicks of Flora on September 14, 1996. They later divorced. Jason was a self- employed hog farmer for over 20 years. He then went to work for Tate and Lyle where he was currently employed. Jason was a hard worker and gave everything to any endeavor. Jason was passionate about Purdue sports. He was watching a Purdue football game on his phone in the ICU and reminding family to record all the games. He had a special interest in antiques, particularly signs and gas pumps. Above all, he cherished his children, his home and his dogs. He often said he would rather hang out with his friends and family at the Howard Hotel and Resort than travel for any vacation. He was preceded in death by his infant twin sister Jennifer, mother Jean Howard, maternal grandparents Carol and William Jennings, an uncle Bill Jennings and paternal grandparents C. Eugene and Geraldine Howard. Jason leaves behind his father and step-mother Ted and Joselyn Howard, siblings Joshua Howard, Barrett Miller and Amanda Deckard, his son Bridon (mother Nicole) and daughter Breely (mother Lisa McKinney), nieces Sarah and Anna Howard, aunts Cathy (Clyde) Markstahler, Connie (John) Bowman and an uncle Todd (Renee) Howard as well as several cousins. In addition to the family, he will be greatly missed by friends Lisa and Dennis Hawn. A private family service will be held with burial to follow at the Ball Hill Cemetery, Cutler. A Celebration of Life will be held for friends and family on Saturday, October 9, 2021 from 2:00 pm to 7:00 pm at Hippensteel Funeral Home and Tribute Center – 405 Cottage St., Delphi, IN. Please dress casually and come to share remembrances of Jason. Covid precautions will be observed. In lieu of flowers, memorial contributions may be made to the Jason Howard Memorial Scholarship c/o Delphi Security Federal Savings Bank – 1260 S Washington St. Delphi, IN, 46923. Share memories and condolences online at www.hippensteelfuneralservice.com http://videos.lifetributes.com/1166849

Jason Marcus Howard passed away on September 25, 2021 at the IU Arnett Hospital due to complications from Covid. Jason was born on Nov. 7, 1971 in Lafayette, Indiana to Ted and Jean (Jennings) Howard. He was a 1990 graduate of Delphi Community... View Obituary & Service Information

The family of Jason Marcus Howard created this Life Tributes page to make it easy to share your memories.