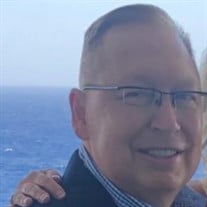 Jay C. Reynolds, 55, passed away peacefully at home, surrounded by his loving family on April 17th. He grew up in Churubusco Indiana, where he participated in many sports and other activities including student body president and the Regional president of FFA. Playing football, where his team went to the Indiana State Championship game his senior year, was one of the highlights of his life. He went on from high school to graduate from Indiana University with a degree from the Kelly School of Business. While there he participated in “Semester at Sea” where he was able to travel around the world. He was a banker and commercial lender in the Lafayette area for many years, and he also started his own construction business, which he continued to run up to his death. He enjoyed restoring dilapidated and abandoned buildings in downtown Lafayette and turning them into beautiful living spaces, and won some state awards for his historical preservations. Some of his favorite projects were the Ball Building, the Cracker Factory, and the Madison Building. He assembled a group of amazingly talented friends who bought and restored the Lafayette Theater at 6th and Main, and he was the catalyst for bringing it to completion. It was a very proud moment when the City of Lafayette held a Grand Opening and the marquis lights came on for the first time in many years. He loved his community and was involved in making it a better place for everyone. He served on numerous boards and committees, and was the past President of the Builders Association of Greater Lafayette (BAGL). He graduated from Leadership Lafayette where he made many life-long connections. He was a great boss and mentor and helped many people get a good start with their careers. He was generous in his advice, and always rooted for the underdog. He was one of the most type-A personalities you would ever meet, and could work circles around almost anyone. He loved everything that he did and never considered it work. He was a “Doer” and would try anything that interested him. His favorite hobbies were bee-keeping, raising chickens, wood-working and building unique furniture, traveling to new places, eating Lizzie’s cooking, and working on his many real estate projects. Jay adored his daughters China and Madison, they were the most important priority in his life, and he was a wonderful father. He said many times “if I had only known how fun they were going to be I would have had 20”. Jay married the love of his life, Liz, on October 10th 2016 on the beach in Gulf Shores Alabama, and they were together many years before that. Jay never met a stranger, and would talk to everyone he came in contact with, always asking them about themselves and their families. He became friends with everyone at the Schwarz Cancer Center, from the receptionists to the scheduling ladies to the nurses who took such good care of him. He fought cancer for 7 years with everything that he had and the heart and courage of a warrior. Of cancer he said “Better me than someone else”, and he kept a positive attitude and never complained. He loved the saying on the wall of the cancer center: Fate whispers to the warrior “you cannot withstand the storm”. The warrior whispers back “I AM THE STORM”. He had a huge personality and his whole life he was a force to be reckoned with. One of his favorite sayings was “Life’s journey is not to arrive at the grave safely in a well-preserved body, but rather skid in sideways, with dust flying, totally worn out, shouting “Holy s*#t….what a ride”. Even though cancer took so much from him physically, it could never diminish his valiant heart and mind and soul, or his amazing smile that could light up a room. He will always be our hero. Survived by his loving wife Liz, his mother Chloe, his daughters China and Madison, sister Tina Herendeen (Rick), nieces Haley and Hannah, 5 step-children Eric Hardy (Angie), Kristen Clute (Jeff), Angie Davis (Dre), Brett Hardy, and Stephanie Hardy, and 5 step-grandchildren, and his faithful dog Z. Special thanks to Dr. Abanour of Indiana University Health, Jay’s amazing doctor, and his entire staff, especially Janell Guyman and Susan Wijcicki for their exceptional care and huge loving hearts. They are our angels. Also special thanks to our wonderful friend Dr. Rich Bloch. In lieu of flowers we ask that you consider donating to Dr. Abanour’s Miles 4 Myeloma, to raise money for research to find a cure for Multiple Myeloma, at cancer.iu.edu/m4m. Visitation will be held from 2pm – 4pm Saturday, September 12, 2020 at Hippensteel Funeral Home. A celebration of Jay’s life will begin at 4pm. In lieu of flowers we ask that you consider donating to Dr. Abanour’s Miles 4 Myeloma, to raise money for research to find a cure for Multiple Myeloma, at cancer.iu.edu/m4m. (Current Covid-19 precautions will be observed along with social distancing. Masks are required). Share memories and condolences online at www.hippensteelfuneralservice.com http://videos.lifetributes.com/1088891

Jay C. Reynolds, 55, passed away peacefully at home, surrounded by his loving family on April 17th. He grew up in Churubusco Indiana, where he participated in many sports and other activities including student body president and the Regional... View Obituary & Service Information

The family of Jay C. Reynolds created this Life Tributes page to make it easy to share your memories.