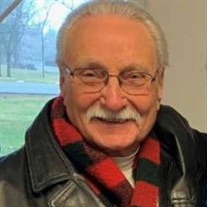 Jerry Lee Christopher, age 77, of Lafayette, passed away Wednesday, April 24, 2019 at St. Elizabeth East, due to complications following Heart surgery. He was born July 16, 1941, to the late Richard and Jane (Stockton) Christopher. Jerry graduated from Otterbein High School. After graduation he joined the United States Air Force. On September 10, 1961 he married his sweetheart Sue Weger of Otterbein in Montmorenci. She preceded him in death on April 24, 2017. Jerry worked as a Heating and Air Technician for L&Z Supply, co-owned and operated the CW Road House aka – Montmorenci Tavern. After retiring he enjoyed driving cars for Louis Motors and Lafayette Limo. He was a member of the VFW Post 492, 40&8, American Legion Post #11, Eagles, Navy Club and the NRA. Jerry enjoyed gambling, checking his traps, loved his dogs, being with friends, his daughter and grandchildren. Surviving is his daughter: Julie Christopher, two grandchildren: Karlie and Johnny Kuckartz all of Lafayette; one brother John (Joy) Christopher of Tennessee, numerous extended family members and many good friends. Along with his wife Sue, he is preceded in death by his parents; son; Greggory Lee Christopher, and best friend and brother in-law, Mike Weger. A memorial service will be held at 7 pm, Monday, April 29, 2019 at Hippensteel Funeral Home with memorial visitation from 5pm to 7pm. Memorial contributions may be made to the American Legion Post # 11. Please share memories and condolences online at www.hippensteelfuneralservice.com http://videos.lifetributes.com/996345

The family of Jerry Lee Christopher created this Life Tributes page to make it easy to share your memories.