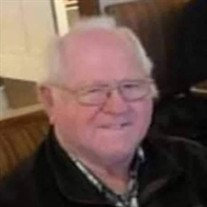 John D. Harvey, 79, a life-long resident of the Lafayette area, passed away August 29, 2021 at University Place. He was born February 27, 1942 in Lafayette, IN, to the late Edwin “Ralph” and Cleone “Dorothy” (Murr) Harvey. He was a graduate of Klondike High School. On April 29, 1967 he married the love of his life, Linda Venable and she survives. John worked in Heating and Cooling repair for Purdue University. He was a member of East Tipp Baptist Church. John enjoyed fishing, hunting and artwork. Along with his wife, Linda, he is survived by his children: Dawn (Kipp) Gerzewski of WI, John “Mark” (Angelica) Harvey of Lafayette and Tim Harvey of Colfax; brother-in-law Lloyd Swisher; and eight grandchildren: Maria, Dominic, Rebecca, Gemma, Anna, Trent, Zane and Edwin; and two great-grandchildren: Dawson and Dominic. He is preceded in death by his parents and sister Susan Swisher. Visitation will be held from 5pm – 8pm Thursday, September 2, 2021 at Hippensteel Funeral Home. Funeral service will be 10am Friday, September 3, 2021 at East Tipp Baptist Church with Pastor Joel Flowers. Interment will follow at Tippecanoe Memory Gardens. In lieu of usual remembrances, contributions may be directed to East Tipp Baptist Church. Share memories and condolences online at www.hippensteelfuneralservice.com http://videos.lifetributes.com/1159239

The family of John D. Harvey created this Life Tributes page to make it easy to share your memories.