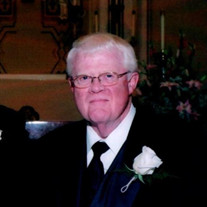 John R. Parlon died peacefully on April 11, 2020 at St. Mary Healthcare. He was born in Lafayette to John C. and Marjorie Whitson Parlon on February 13, 1943. John spent his early childhood in New Richmond, Indiana and graduated from Campion Jesuit High School in Prairie Du Chien, Wisconsin in 1961, where he formed many lasting friendships. He graduated from Ball State University in 1967 with a bachelor’s degree in education and later earned his master’s degree. John taught in Louisville, KY for two years before returning to Lafayette, where he enjoyed over 30 years of teaching for the Lafayette School Corporation. He helped shape young minds at Tippecanoe Junior High School and Sunnyside Middle School, teaching social studies and business classes and coaching football. John was a lifelong member of St. Mary Cathedral. On July 27, 1973, he married Lois Elaine Van Schepen. Surviving with his wife are two children, Beth (Matt) Taylor of Fishers, IN and John P. (Hannah) Parlon of Lafayette. He is also survived by five beloved grandchildren: Madeline and Amelia Taylor and Vivian, John B., and Thomas Parlon, and a special niece Kim Weaver (Kevin) Charlet and nephew Bob Weaver. He is preceded in death by his parents and two sisters, Jane Ann (Greg) Weaver and Beth Parlon-Lyboult. John never knew a stranger and was a friend to many. He was an avid outdoorsman and enjoyed fishing trips to Wisconsin and Minnesota with his friends and son. He was a loyal Purdue Boilermaker and Indy 500 fan, and always rooted for the Chicago Cubs and Bears. His family extends appreciation and gratitude to his kind caregivers at St. Mary Healthcare Center and Guardian Angels Hospice. A private graveside service will be held for his immediate family and a memorial to celebrate John’s life will be held later. Memorial contributions may be made in John’s name to the American Cancer Society or St. Mary Cathedral. Hippensteel Funeral Home assisting family with arrangements. Share memoires and condolences online at www.hippnsteelfuneralservice.com Please join John Parlon’s family to celebrate his life on Sunday, August 8, 2021 from 2pm – 4:30pm at the American Legion Post 11 – 1801 S 9th St, Lafayette, IN. John was a loving son, husband, father, grandfather and uncle. He was known for his infectious laugh and love of people. He truly never met a stranger. Share memories and condolences online at www.hippensteelfuneralservice.com http://videos.lifetributes.com/1151215

The family of John R. Parlon created this Life Tributes page to make it easy to share your memories.