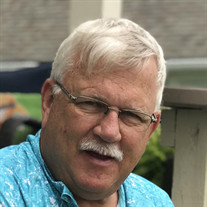 John William Wells, 64, of Monticello, passed away unexpectedly on Sunday, February 16 at 3:29 am at IU Health White Memorial Hospital. A celebration of life will be held on Saturday, February 22 at Faith East Auditorium, 5526 State Road 26 East, Lafayette, IN. Visitation will be held from 12:00 pm to 2:00 pm with a memorial service beginning at 2:00 pm. Burial will be private at a later date. John was born on December 31, 1955 to the late William R. and Betty J. (Hamilton) Wells in Lafayette. He married Rhonda Reagan, on April 12, 1975, who survives. John is also survived by his 3 children and their families: Lyndsi, John, and Emma Rogers; Josh, Julia, Georgia, and Vivienne Wells; Justin, Allison, Mae, and Henry Wells; his mother-in-law and her husband, Bee and Herb Reagan-Ringel; his sister, Barb Schuster; his brother-in-law, Ron Reagan (Leslie Ainley); his niece, Jaki Graff and her family; his nephew, Aron Schuster and his family; numerous neighbors, friends, co-workers, cousins, aunts, and uncles. John was preceded in death by his parents, Bill and Betty Wells, and father-in-law, Terry Reagan. “Johnny Bill” was a multi-sport athlete in high school, participating in the football and swim teams, as well as being a cheerleader during basketball seasons. In the summertime, he recycled his speedo to compete in local and state slalom water skiing tournaments. He was a 3-year defending Lake Freeman Open Waterski Champion. He was a 1974 graduate of Harrison High School (barely). After a stellar high school career, he was accepted to Hyles-Anderson College, where he successfully set a record for accumulating the most demerits in school history in less than 24 hours. John quickly returned to Lafayette where he joined his father in the family business, Wells Painting and Decorating, until he pursued his dream of becoming a police officer. In 1987, he graduated from the Indiana Law Enforcement Academy, ILEA Class 87-89. John was a well-known and respected Lafayette Police Officer for 31 years. He loved the community he served and they loved him. It was common for him to be requested by name when felons called to turn themselves in (“I will only tell you where I am if Officer Wells is the one to come to arrest me”). Early in his career, he wrecked more squad cars than could be counted, had numerous warnings for writing too few tickets, and frequently pulled over the citizens of Lafayette just to smile and say “Hi.” Officer Wells was a Field Training Officer, hostage negotiator, and a member of the Crisis Intervention Team. On April 22, 1993, he was shot in the line of duty, and later, had a starring role in an episode of “America’s Most Wanted.” As he became a veteran police officer, he was proud to be known by everyone, even fellow officers, as “Big Daddy.” He had many part-time jobs in and around Lafayette where he made lifelong friendships. “Coach Wells” mentored many kids for East Tipp baseball and football teams. While working the night shift and managing family needs, he became a school bus driver. To this day, “Mr. Wheels” was proud to be the only bus driver in the history of the Tippecanoe School Corporation to pull over a motorist and write a moving violation ticket while driving a school bus. “Big John” also enjoyed another part-time job as a Mall Cop at the Tippecanoe Mall, where he developed his affinity for Segways. After supervising his children at ball games, on the bus, and at the mall, “Dad” continued his surveillance efforts by working security at Dog-N-Suds and Purdue Football games, and driving a limo. After retiring from the Lafayette Police Department, he enjoyed a short time of tinkerin’, piddlin’, worm farming, handymanning (pro bono), and being the most patient fisherman on the lake, before returning to serve his community as a Tippecanoe County Bailiff, where he was currently employed. His passion for service transcended the police force, as he served on numerous boards, such as SFLECC, past president of the Lower Hambridge Home Owners Association, Lafayette Police Pension & Hiring Board, Jefferson Township Trustee in Carroll County, and was involved with recruiting for the United States Naval Academy as a Blue & Gold Officer for nearly 10 years. He was an active member of the F.O.P Arman Lodge #49. He served as a Deacon at Christ Fellowship Church in Monticello. Additionally, he spent countless hours mentoring and counseling troubled and at-risk youth, and anybody who wanted to talk. However, the bulk of his service was in everyday interactions, and he had an impact on every person he came into contact with. He was quick with a compliment, full of zeal, made everyone feel special and deeply cared about people. He was friends with everyone and respected by all. He was an amazing husband, father, grandfather, and a model citizen. “Pa” loved his life on Lake Freeman and enjoyed passing on his love of skiing, fishing, and boating to future generations. He was a rarity in this world, a man of great character. A stern, yet compassionate officer. A fun, proud, loving father. While surprising and abrupt, John completed his story. A story that will be told throughout the years because people like him only come around once in a lifetime. His love and passion for life was as big as he was and it radiated throughout the community. Regardless of how you knew him: John, Johnny Bill, Coach Wells, Officer Wells, Mr. Wheels, Big John, Big Daddy, Dad, Big, or Pa, we are better for the time we spent with him, albeit too short. In lieu of flowers, donations can be made to the Greater Lafayette Police Foundation: http://lafayettepolicefoundation.com/donate/. Share memories and condolences online at www.hippensteelfuneralservice.com

John William Wells, 64, of Monticello, passed away unexpectedly on Sunday, February 16 at 3:29 am at IU Health White Memorial Hospital. A celebration of life will be held on Saturday, February 22 at Faith East Auditorium, 5526 State Road... View Obituary & Service Information

The family of John William Wells created this Life Tributes page to make it easy to share your memories.