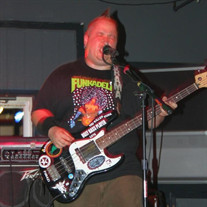 Karl Cameron Vaughn of Lafayette, Indiana, passed away March 13, 2021, of an apparent heart attack. He was 46 years old. Karl was the fourth child of Nola May (Goode) Vaughn and Clarence Lee Vaughn, of Oak Hill, West Virginia, both of whom passed away in recent years. He was born Jan. 16, 1975, at Plateau Medical Center in Oak Hill. Karl attended Greater Beckley Christian School in Prosperity, WV, and graduated from Oak Hill High School in 1993. He also briefly attended West Virginia Institute of Technology in Montgomery, WV. He maintained many friendships from his childhood and high school years until the end of his life. Karl moved to Lafayette in 2000 and met his wife Sarah in 2005. They were married on Valentine’s Day in 2007 and were the loving owners of many happy cats. His first real job was selling CDs, vinyl, and cassettes at Camelot Music in the Crossroads Mall in Beckley, West Virginia. He worked for many years at Caterpillar Logistics in Lafayette and most recently at Skjodt-Barrett Foods Inc. His coworkers loved him mostly. Karl was a lifelong musician, guitarist, and singer-songwriter, fond of many styles of music, from heavy metal to punk, country, alternative, rap, and jazz. He also founded several bands and played bass, wrote, and sang lead and backing vocals for: Mr Melodrama, with Tony Daniels, Greg E. Smith, Phil Davis, and Linus Roop, 1995-2000; KacTi, with Tony Daniels, 2002-2006; Black Damp, with Brian Boszor and Ray Stinson, 2002-2007; The Disillusioned, with Ray Alaniz and Rhonda Tilford, 2010-2013; THOGGOHT, with Ryan Strawsma and Corey Guilford, 2013-2021; and Indistinct Chatter, with Brian Boszor and Scott Engwall, 2020-2021. Karl participated in the Doom Room Random Band Challenge in both 2018 and 2019 in Lafayette. Over the years, Karl amassed and curated one of the most eclectic music collections on earth, comprising thousands of CDs and vinyl records, plus an array of guitars, pedals, amps, and similar gear. In recent decades, he taught himself to build synthesizers and composed electronic music. An avid concertgoer for decades, he always considered himself even more of a music fan than a musician. His favorite band was Midnight Oil of Australia. Over the years, other favorites included the Clash, Black Sabbath, Bob Dylan, High On Fire, Fishbone, U2, Miles Davis, Cop Shoot Cop, Nine Inch Nails, Peter Gabriel, Prince, PJ Harvey, Lou Reed, Tom Waits, Soul Asylum, Public Enemy, Soundgarden, Fela Kuti, the Cure, and Company Flow, among innumerable others. Karl was always eager to share recommendations with anyone he encountered, and in this way, he helped hundreds of people discover unfamiliar artists and songs that would become lifelong favorites. Karl is survived by his wife, Sarah Engwall Vaughn; his brother, Stephen (Melinda) Vaughn of Dothan, WV; sisters Shelby (Stephen Hartmann) Vaughn of Martinsville, WV, and Sue (Rick) Morris of Oak Hill, WV; nephews Caure Vaughn Armstrong (Lafayette, IN) and Travis (Noelia) Vaughn (Savannah, GA); and friends Brian Boszor (Lafayette, IN), Tony Daniels (Charleston, WV), Jacob Abraham (Beckley, WV), and Geoff Pittman and Todd Short of Oak Hill, WV, among many, many others. Karl was truly his brother's keeper, as he cared deeply for almost everyone, except for one or two Presidents. He loved Star Trek, West Wing, Marvel movies, H.P. Lovecraft, and Bloom County comics. A memorial service is planned for Saturday, March 20, in Lafayette, which will be held from 2:00 p.m. to 5:00 p.m. Current Covid-19 precautions will be observed along with social distancing. Masks are required. Hippensteel Funeral Service is handling all arrangements. Karl will be cremated in accordance with his wishes. His service will be livestreamed from 5:00 p.m.-6:00 p.m. EST, and archived for later viewing at https://webcasts.lifetributes.com/1127582 In lieu of flowers, please send your condolences to Sarah ... or, be kind to a total stranger; buy a ticket for a livestreamed or socially-distanced, masked concert; or buy a record from a band you just discovered ... Karl will know. Share memories and condolences online at www.hippensteelfuneralservice.com

Karl Cameron Vaughn of Lafayette, Indiana, passed away March 13, 2021, of an apparent heart attack. He was 46 years old. Karl was the fourth child of Nola May (Goode) Vaughn and Clarence Lee Vaughn, of Oak Hill, West Virginia, both of whom... View Obituary & Service Information

The family of Karl Cameron Vaughn created this Life Tributes page to make it easy to share your memories.