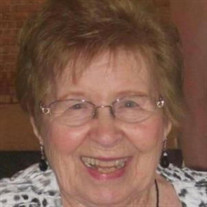 Leah B Albregts, 97, of West Lafayette, IN, passed away Monday July 26, 2021 at Westminster Village. Leah was born on December 4, 1923, at home in Benton County to the late Fredrick and Estella (Steinmetz) Brouillette. Leah was a 1942 graduate of Freeland Park H.S. While there she was a cheerleader, rooting-on her future husband Francis Albregts. She went on to work at Alcoa during W.W.II while Francis served in the European Theater. Later, on December 27, 1943, in Dunnington, IN, the high school sweethearts, Leah and Francis were married. They celebrated 68 years together until his death, on February 8, 2011. Surviving are her children, Linda McDowell (Kenneth), John (AKA Jack), Thomas (Erin), and Sandra Rock, Leah’s sisters, Ann Scherer and Janet Metzinger both of West Lafayette. Grandchildren, Jonathan Albregts, Camille Morrison, Shane Albregts, Jennifer McDowell, Kimberly Schorr, Aaron Albregts, Katherine Matson, Sean Rock, Blake and Payton Albregts. Great Grandchildren, Nichole, Kaysee, Sydney, Morgan, Eliza, Louie, Asher, Oscar & Cooper. Leah was proceeded in death by her son, Gregory Joseph, her sisters, Rita Goetz, Dorothy Farrell, Claire Windler, and a brother Donald Brouillette. Leah led an active life. Her faith was evident in her devotion to church, family and friends. She was a member of St. Boniface Catholic Church where she spent much of her time in the parish helping with planning and preparing funeral dinners. Leah also enjoyed transporting handicapped children, taking meals to feed her family in the fields, card playing, square dancing and preparing great Sunday dinners for her family. Leah was also a member of Sigma Alpha philanthropic sorority for over 60 years. She enjoyed friendship & traveling with her sorority sisters, which included her daughters and sister-in-law Betty Albregts. Leah treasured her children, grandchildren and great grandchildren most of all. Donations made be made to Central Catholic H.S. or Alzheimer’s recovery. Visitation will be held Sunday, August 1, 2021 from 5pm – 7pm at Hippensteel Funeral Home. Funeral Mass will begin at 10am Monday, August 2, 2021 at St. Boniface Catholic Church with Father Jeff Martin officiating. A live webcast of the Mass will be available on our website at www.hippensteelfuneralservice.com Interment to follow at St. Mary’s Cemetery. Share memories and condolences online at www.hippensteelfuneralservice.com Click on the link below to watch the webcast for Leah B. Albregts. https://webcasts.lifetributes.com/1152336 http://videos.lifetributes.com/1152336

Leah B Albregts, 97, of West Lafayette, IN, passed away Monday July 26, 2021 at Westminster Village. Leah was born on December 4, 1923, at home in Benton County to the late Fredrick and Estella (Steinmetz) Brouillette. Leah was a 1942 graduate... View Obituary & Service Information

The family of Leah B. Albregts created this Life Tributes page to make it easy to share your memories.

Leah B Albregts, 97, of West Lafayette, IN, passed away Monday...