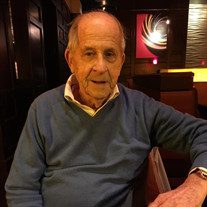 Lewis Reid Sales, 91, a life-long resident of Delphi passed away Thursday, December 26, 2019 at his home. He was born December 14, 1928 in Delphi, to the late Lewis and Catherine (Morrow) Sales. Reid’s proudest professional achievement was establishing Reid Sales Music in 1947, which he owned and operated until his retirement in 2000. Since his retirement, the company has been owned and operated by his eldest son, Mark Sales, and his two children, Brittany and Jonathan. He was also the inventor of the Ultimate Pool Table Mover, which was sold worldwide. He served his country for 18 years as a Master Sargent in the National Guard; and was a member of the St. Joseph Catholic Church. On December 28, 1957 he married the love of his life, Marjorie Louise Brooks. They spent many winters together at their home in Ponce Inlet, Florida. She preceded him in death on January 5, 1999. Reid is survived by his three children: Mark Sales, Diana Sales Dittman (Husband: Kevin), and Michael Sales (Wife: Lora). He is also survived by nine grandchildren: Jonathan Sales, Brittany Sales Phillips (Husband: Ben), Brandon Dittman (Wife: Christine), Bryan Dittman, Andrew Dittman, Ashley Dittman, Joshua Sales, Zachery Sales, and Brooke Sales. Along with his wife, Marjorie, he is preceded in death by his parents, his sister Regina (Husband: Robert Coomey) and brother Patrick Sales. Visitation will be held from 12pm – 2pm Thursday, January 2, 2020 at Hippensteel Funeral Home and Tribute Center – 405 Cottage St, Delphi, IN. Funeral service will begin at 2pm with Father Clayton Thompson officiating. Burial will follow at St. Joseph Cemetery. In lieu of usual remembrances, contributions may be directed to the American Foundation for the Blind or American Breast Cancer Awareness. Share memories and condolences online at www.hippensteelfuneralservice.com

The family of Lewis Reid Sales created this Life Tributes page to make it easy to share your memories.

Lewis Reid Sales, 91, a life-long resident of Delphi passed away...