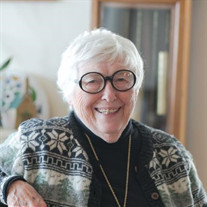 Lois Ann Long, 91, of Lafayette passed away peacefully at her residence Saturday, May 4, 2019. She was born March 10, 1928 in Carroll County, IN to the late Evan and Averle (Ward) Sanderson and loved by stepmother, Ruby Larimore Sanderson. In 1947 Lois married John Gordon Slack and he preceded her in death in 1950. On Christmas day in 1955 she married William “Bill” Long. He preceded her in death in March, 2000. Lois is survived by her children: Jeralyn “Jerri” (David) Faris of Delphi, Patrick (Tere) Long of Noblesville and James Long of Indianapolis. She is also survived by 21 grandchildren and 51 great-grandchildren. Some fun biographical facts: · Lois was a yell leader for Carrollton High School as a member of a graduating class of 11. · She attended Purdue University for a year to earn her Mrs. · After being widowed, she worked at Loeb’s Department Store in Lafayette to help support her two young children. · During those years she sported a little red convertible. Jerri has a clear memory of a police stop at which time Lois was told to “get those children down into the back seat!” · She made a hole-in-one at Edwood Glenn in 1954! · Lois adorned all of the windows in the grand house at 720 S. 9th St. with white muslin curtains. · In 1963-1964 she was the county supply chairman for the Barry Goldwater campaign. “This House Sold on Goldwater” was the sign on the front lawn that caused to many to ask if they were moving! · The political loss in 1964 resulted in an eagerness to accept an invitation to study the Word of God in March, 1965. Lois and Bill attended a study in the gospel of John and came to know Jesus Christ. Their lives were transformed for eternity, and He became their passion and love. · In the 1960’s, Lois and Bill began having students live with them, and that practice continued for decades with the total number being in the 40’s. · They were founding members of the Reformed Presbyterian Church of Lafayette in 1968. · Good News Clubs were held in their home for children of Highland Park neighborhood for many years. · Lois initiated a women’s Bible Study at the YMCA and lead the study for 20 years. · She was a volunteer at Home Hospital for 20 years, delivering flowers to patients’ rooms. She always enjoyed meeting new people and making new friends. · Her sons’ sporting events brought great delight for many years through Highland Gradeschool, Tippy Jr. High, and Jefferson High School, on through years at Purdue, Taylor University, and the Lafayette Generals Amateur Football League. · Lois was a huge fan of the Boilermakers and loved to tell the stories of her years there. · Oh, so many stories to tell! She never met a stranger and loved people! Everyone she met quickly learned of her many grandchildren and great grandchildren, listed below: Grandchildren: Cariann Spirydovich, James Faris, Ashley Long, Ruth Hanson, Avery Nevitt, Daniel Faris, Esther Ritenour, Anna Sturm, Flo Blackwood, Rebekah Magill, Luke Long, Beth Cavanaugh, Jacob Long, Orlena Hart, Anna Nwosu, Levi Long, John Long, Alex Long, Samuel Long, Jerusha Long and Keziah Long. Great-grandchildren: Nadia, Maja, Daniel, Katherine and Elizabeth Spirydovich; Ellie, Cargill, Cameron, Lydia, Caleb and Julia Faris; Miriam, William, Timothy, Megan, John, Joel and Suzanne Hanson; Samuel, Liam and Isaiah Faris; Joy Ritenour, Liesl, Elliot, and Margaret Sturm; Felicity, Elsie, Emory and Allison Blackwood; David, Jenny, Elisha, and Esther Hart; Parker Dragan,Tanner Cook, Jagger Cook; Isaac and Felix Nevitt; Eliya, Caleb, Grace, and Eve Magill; Charlotte and Trinity Long; Caleb Cavanaugh; Abigail, William, and Gabrielle Long; Jidenna Nwosu; plus a soon-to-be-born great grandson Ritnenour and great granddaughter Cavanaugh. She was preceded in death by her parents; both husbands; and sons David Slack Long, and Michael “Gordo” Long, and great-grandson Callaway Cook; also her brothers Dean and Mitch Sanderson and sister Francis Lynch. Visitation will be held Friday, May 10, 2019 from 4pm - 7pm at the Reformed Presbyterian Church of Lafayette – 1723 S 9th St, Lafayette, IN. Funeral Service will follow at 10 a.m., Saturday, May 11, 2019 at the church with Pastors Adam Niess, James Faris, and David Hanson officiating. Interment to follow at Tippecanoe Memory Gardens. In lieu of flowers, memorial contributions may be directed to the Reformed Presbyterian Church of Lafayette. Please share memories and condolences online at www.hippensteelfuneralservice.com http://videos.lifetributes.com/998516

Lois Ann Long, 91, of Lafayette passed away peacefully at her residence Saturday, May 4, 2019. She was born March 10, 1928 in Carroll County, IN to the late Evan and Averle (Ward) Sanderson and loved by stepmother, Ruby Larimore Sanderson. In... View Obituary & Service Information

The family of Lois Ann Long created this Life Tributes page to make it easy to share your memories.

Lois Ann Long, 91, of Lafayette passed away peacefully at her...