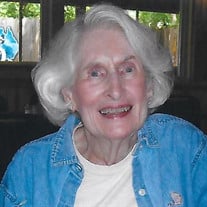 Margaret G. “Peggy” Smith of Westminster Village in West Lafayette passed away on November 22, 2019. She was born May 22, 1923, to William C. and Agnes S. Gordon in Indianapolis, IN. Peggy graduated from Howe High School in 1941. She was married on May 30, 1942 to James F. Smith of Wilkinson, IN. They celebrated their 66th wedding anniversary in 2008. Jim preceded her in death on April 7, 2009. Prior to the birth of her children, Peggy worked in Indianapolis for a dentist and the High Point Oil Company. She and Jim moved to Virginia Beach, VA, for his 4 years in the Army during WWII. She worked for a law office there. After Jim’s honorable discharge, they moved back to Indianapolis. In 1953, they moved to Lafayette, IN, where she enjoyed her bridge club and membership in Psi Iota Xi sorority. After her children were raised, she worked for her good friend, Jim Ransom, at Lafayette Accounts Service. In 1985, they retired to Aiken, SC. They moved back to Lafayette in 1999. Peggy was a member of Central Presbyterian Church for over 50 years. She was an Elder, a Deacon, a high school youth group advisor, a volunteer receptionist and active in Circle 19. She and Jim met many of their friends in the Mariner’s group there. They also enjoyed their membership in the Presbyterian Church in Aiken, SC. She was predeceased by her parents, a brother, Bill Gordon and two sisters, Carolyn Kunkle and Jean Ladd. Survivors include her children, Sandra Smith and her husband, Greg, of Muncie; and Jay Smith and his wife, Rita, of West Lafayette. She has 4 grandchildren: Kyle, Jennifer, Ryan, and Luken; 7 great-grandchildren, and a grand-dog, Painter, who she always worried about being warm enough in his garage kennel. The family would like to acknowledge the caring staff at Westminster Village and from ViaQuest Hospice. Her special friend at Westminster was Robert N. Woerner. He was also a graduate of Howe H.S. and was extremely kind to Peggy and her family. Her ten-plus years at Westminster clearly added to her life. In lieu of flowers, please make contributions to the Westminster Village Foundation, 2741 Salisbury Street, West Lafayette, IN 47906. One of Peg and Jim’s favorite activities in both Lafayette and Aiken, was gathering for cocktails with friends in their “Friday Night Gang.” Accordingly, the family welcomes friends as well as residents of Westminster to a reception on Friday, December 6, 2019, from 2:00 to 4:00pm, in The Pub at Westminster Village. A private graveside service will be held at a future date. Arrangements are being handled by Hippensteel Funeral Home. Please share memories and condolences online at www.hippensteelfuneralservice.com

The family of Margaret "Peggy" Smith created this Life Tributes page to make it easy to share your memories.