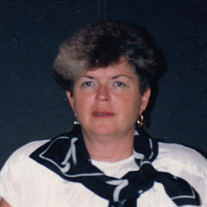 Margery Ann “Midge” Claybourne-Rush, 78, of Lafayette passed away Saturday, August 3, 2019 at The Springs. She was born June 27, 1941 in Talbot, IN to the late William and Esta (O’Brien) Iliff. On January 15, 1960 she married Robert Charles Claybourne in Chicago, IL. He preceded her in death in 1978. She married Ronald “Phil” Rush on November 16, 1990 in Lafayette. He preceded her in death in 1998. In 1991 Midge graduated from Purdue University with a Bachelor of Science degree from the School of Nursing. She worked for Home Hospital as a Registered Nurse before retiring as a Nursing Supervisor with Indiana Veteran’s Home. She was also a member of Sigma Theta Tau. Midge was an avid reader who loved traveling, quilting, and animals. She also had a knack for designing homes. She is survived by her daughters: Kaye Heidenreich of Chicago, Leslie Claybourne of Delphi and Tina (Efrein) Torres of Lafayette; sisters: Norma (James) Bouwkamp and Lynn (James) Powers both of Lafayette. She is also survived by five grandchildren: Elizabeth Klumpe, Luciano Torres, Nicholas Torres, Marcus Torres, and Lauren Torres - active United States Navy; and one great-grandchild Teagen Klumpe. Along with her husbands, she is preceded in death by her parents, and sister Nola Bishop. Visitation will be held from 5pm – 7pm Thursday, August 8, 2019 at Christ United Methodist Church. Funeral service will start at 7pm with Pastor Kurt Freeman officiating. There will be a private family burial in Spring Grove Cemetery. In lieu of usual remembrances, contributions may be directed to Pawswap 1900 Iroquois Trail, Lafayette, IN 47909, www.pawswapofgreaterlafayette/helping. Share memories and condolences online at www.hippensteelfuneralservice.com http://videos.lifetributes.com/1016642

The family of Margery Ann Claybourne-Rush created this Life Tributes page to make it easy to share your memories.