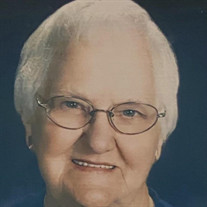 Margie Gosney, 89, of Brookston passed away September 7th, 2021 surrounded by family at her home. She was born March 8th, 1932 in Wrights Corner, Indiana to the late William T. and Flossie (Brandt) Coleman. She was a 1950 graduate of Aurora High School where she was a cheerleader. She was head baker at Harrison High School, worked for Judie’s Catering, was a homemaker, and had retired from Purdue University where she worked in Military Stores in the Armory for the ROTC Program. On June 23rd, 1951 she married Charles A Gosney at St Johns Lutheran Church in Lawrenceburg, Indiana. He preceded her in death on January 11th, 2004. Margie was a member of Delta Theta Chi and LWB Sororities. She enjoyed Golf, Crocheting, Crafts, Gardening and Kimioke. She also was an avid bowler having a 300 game and carrying an average of over 200 for several years, numerous local, league, and tournament championships, and had bowled in over 25 National Bowling Tournaments. She also had received the Lady Bowler of the Year award and was a Junior Bowling Coach. She had also served as a 4-H Leader. Margie was also a Volunteer at the Indiana Veterans Home working in the Crafts Room and received the Volunteer of the year award eight years in a row for having the most volunteer hours. She was a member of the American Legion Ladies Auxiliary at Post 492 where she held many Chapter, District, and state offices. She was also very involved in the “Poppy” program, Child Welfare programs, preparing food in the kitchen, and running the cash drawer at the Legion Post. She had also received the Lifetime Service Award from American Legion Post 492 and received the National Unit Member of the Year award for 2015-2016. She also attended Crossroads Christian Church. Surviving are two of her children: Mark A Gosney of Brookston, Indiana and Carol A Masterson of Brookston, Indiana. She is also survived by 11 Grandchildren, 34 Great Grandchildren, and 9 Great - Great Grandchildren. Along with her husband, Charles, she is preceded in death by her daughter Pamela J Howard, daughter Debra S Gosney, Son Michael L Gosney, Grandson Steven Masterson, and her parents. Visitation will be held from 5:00pm – 8:00pm on Sunday September 12th, 2021 at Hippensteel Funeral Home. Funeral Service will be at 10:00am on Monday September 13th, 2021 at the funeral home with Minister Michael Duff officiating. A live webcast of the funeral service will be available on our website www.hippensteelfuneralservice.com. Interment to follow at Tippecanoe Memory Gardens. Share memories and condolences online at www.hippensteelfuneralservice.com Click on the link below to watch the webcast for Margie Gosney. https://webcasts.lifetributes.com/1160875

Margie Gosney, 89, of Brookston passed away September 7th, 2021 surrounded by family at her home. She was born March 8th, 1932 in Wrights Corner, Indiana to the late William T. and Flossie (Brandt) Coleman. She was a 1950 graduate of Aurora... View Obituary & Service Information

The family of Margie Gosney created this Life Tributes page to make it easy to share your memories.