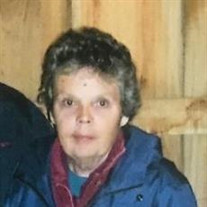 Marilyn L. Gamble, 80, of Lafayette, IN passed away on July 19, 2019. She was born on February 15, 1939 & grew up in Jackson Township on the family farm of Ancle & Vivian Gamble. Marilyn attended Jackson Township School until it closed. She was a member of the first graduating class of Southwestern High School in 1957. While growing up, Marilyn was very active in 4-H and helping on the farm. She showed mainly Herford cattle locally, at the state level and many times at the Chicago International. In 1954 she was Champion Herford showman & in 1955 exhibited the Grand Champion Herford Heifer at the Indiana State Fair. In 1956 she was overall beef showman at the Tippecanoe County Fair. In her adult life continued to raise Herfords and cared for a herd up to 80 head of cows for many years. On November 17, 1957 she married Kermit Naylor. They were married for 27 years and spent their lives farming, trail riding, camping, collecting antiques and loving their family & community above all else. While actively farming, Marilyn prepared many meals for hay baling crews, seed corn pickers and anyone who showed up at noon time for a hearty meal around her table. She enjoyed hosting many large parties in her home for family & friends, especially around the Holidays. Her love for cooking led her to a 20-year involvement at the Indiana State Fair Pioneer Village as their main cook. She prepared thrashers style meals for the village workers every noon and accommodated many state dignitaries. Marilyn was raised in the Quaker tradition. She, along with mother, Vivian & son, Mark, were instrumental in the inception of the, now annual, Quaker Fair at Farmers Institute Friends Meeting. Marilyn was a very successful businesswoman. For many years she operated the Romney Coffee Shop until founding her own establishment “Sarah’s Oaks”. This was the result of her love of antiques, the history of Farmers Institute area and her ability to prepare authentic farm meals. She cooked for people that came from all over the state, surrounding states and even internationally. As a result of the restoration of the house and property for Sarah’s Oaks, she was awarded the “Wabash Valley Trust for Historic Preservation’. She was also featured in several publications for her original efforts at Sarah’s Oaks. Marilyn was preceded in death by her parents, Ancle & Vivian (Macy) Gamble, husband, Kermit R Naylor & son Mark R Naylor. She is survived by daughter, Miriam E (Tim) Farrell, a brother, Ronald (Mary) Gamble & sister, Judy (Bob) Dykstra. She is also survived by several nieces and nephews and great nieces and nephews. In keeping with the simplicity of the Quaker tradition, Marilyn has chosen cremation. A celebration of life will be held at The Barn at Sarah’s Oaks at 4545 W 660 S on August 11, 2019 from 2:00pm to 6:00pm with a short Meeting for Worship service at approximately 6:00pm. In Lue of flowers, please consider memorials to a charity of your choice or may we suggest Riley Children’s Hospital or Franciscan Hospice of Lafayette. Memorials may be collected at her celebration. Information on all charities will also be available. Share memories and condolences online at www.hippensteelfuneralservice.com

Marilyn L. Gamble, 80, of Lafayette, IN passed away on July 19, 2019. She was born on February 15, 1939 & grew up in Jackson Township on the family farm of Ancle & Vivian Gamble. Marilyn attended Jackson Township School until it closed. She... View Obituary & Service Information

The family of Marilyn L. Gamble created this Life Tributes page to make it easy to share your memories.