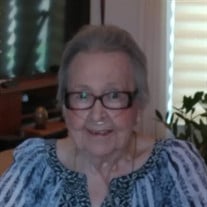 Martha Kerlin Clifford passed from this life, December 31, 2019 at Franciscan Hospital East in Lafayette one hour before the year 2020. She was the fourth of six daughters born to Frank and Mattie Kitchen Kerlin. Her sisters preceded her in death: Alberta (Charles) Beale, Florence (Todd) Wikle, Dottie (Bud) Ryder, Francis June, and Rozella Mears. Martha was always proud to be a member of the Flora High School class of 1943. After high school, she lived in Indianapolis for fourteen years, working at Indianapolis Life, Hoosier Mortgage Service, Veterans Administration Regional Office, and Royal McBee. While at Royal McBee, she trained employees of Brown Rubber Company and Fairfield Manufacturing on the LGP-30, one of the earliest computers. In 1957, Martha married James Richard Clifford of Delphi, IN, who preceded her in death in 1971. Together they had three children: Frank Andrew (Drew) Clifford, who preceded her in death in 2018, James Hugh Clifford, and Suzanne Clifford. She is also survived by two granddaughters, Samantha and Francesca of Denver, CO. Martha remained close with the Clifford family throughout her life. In 1980, Martha moved from Delphi to Lafayette, Indiana, where she retired from Dimension Cable. For ten years, from 1990 to 1999, she lived in Denver, Co, where she retired from Citibank. Since 2000 Martha has resided mainly in West Lafayette, IN. She enjoyed living at the Friendship House and with her children in West Lafayette. She also enjoyed travelling the world with her daughter. You can see her on YouTube at https://www.youtube.com/user/Marthatravels Martha was always a great team player. She made everyday activities seem fun and indulgent. She will be missed greatly. She wished to be cremated and private services will be held at a later date. Hippensteel Funeral Home and Tribute Center – 405 Cottage St., Delphi, IN 46923 assisting family with arrangements. Share memories and condolences online at hippensteelfuneralservice.com

Martha Kerlin Clifford passed from this life, December 31, 2019 at Franciscan Hospital East in Lafayette one hour before the year 2020. She was the fourth of six daughters born to Frank and Mattie Kitchen Kerlin. Her sisters preceded her in... View Obituary & Service Information

The family of Martha Kerlin Clifford created this Life Tributes page to make it easy to share your memories.